Treasures from the Vault at Decorators Supply 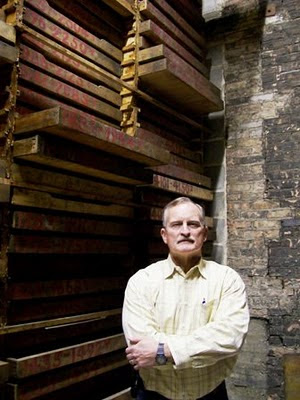 At the heart of one of the oldest businesses in Bridgeport is 2 story vault behind a steel door, stacked to its lofty ceilings with shelves of wooden trays. Each tray is 4 feet wide and 6 feet deep, and each one is packed with blocks of ornament, carved by hand in hickory and oak. You cannot hire craftsmen capable of carving such detail today. 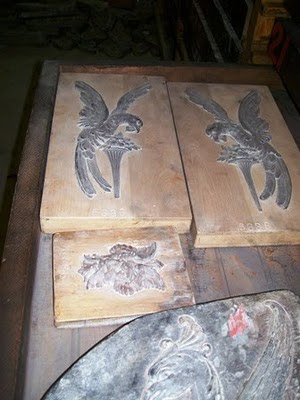 They are the surviving library of patterns Decorators Supply has used to mold plaster and composition ornament to decorate interiors for over 100 years. When Decorator’s Supply first set up shop in 1883, interior embellishment was just becoming widely available. Builders could order ornament by the linear foot from catalogues, rather than commissioning skilled craftsmen to produce custom designs. Though Decorators Supply has always done custom projects alongside its catalogue business.

They helped decorate the White City for the Columbian Exhibition that lined the Midway in 1893, and they have provided decor for Disney, and the Epcot Center in Florida. They detailed the fantasy of at least 75 of the movie theaters built in Chicago in the early part of the 20th century, including the Spanish courtyard for the Ramova Theater in Bridgeport, and they molded military emblems during World War II.

Alongside the landmark projects, they have lent elegance to private parlors and lobbies of countless banks, courthouses, and lakeshore co-ops. Occasionally President Steve Grage, whose grandfather William Grage Sr., first joined the business as an office boy in 1896, will glance up at a lobby ceiling and see patterns he is still being asked to produce for new installations today. 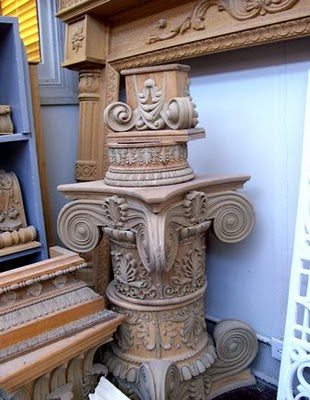 The patterns in the vault at their workshop at 3610 South Morgan Street represent a fraction of the creations of generations of craftsmen employed by Decorators Supply. Patterns for a grand show room were sometimes created to realize the architect’s design, and then discarded when the project was built.

Many others were left behind when the business moved to Morgan Street from their old shop at 2601 South Peoria, to make way for the Stevenson Expressway, in 1963. The building on Peoria went up in a terrific fire shortly after they had moved out – possibly as a shortcut maneuver by the demolition crew.

Today, only a fraction of the patterns stored in the treasure trove in the current shop on Morgan Street actually appear in the company catalogues. “We could create a new catalogue with entirely different patterns,” Steve says.

All told, Steve says Decorator’s Supply has about 12,000 molds – originally made by pressing the carved patterns into a bed of pitch. Many of them are variations on common patterns. They have over a hundred versions of egg and dart, bead and barrel, and lamb’s tongue. “There are so many variations, in the details, the depth of the pattern…” Steve says. They’ll add one more version of egg and dart for 29,000 square feet of crown molding – to match the exact pattern for the restoration of a grand bank lobby in Montgomery, Alabama.

Meanwhile, the old pitch molds tend to crack, so they are in the process of gouging out the pitch and replacing it with more durable polyurethane – an ongoing project Steve says is about 20% complete.

All the plaster and composition ornaments are made to order, Decorators Supply doesn’t warehouse stock. And aside from the occasional big bank or courthouse project, the bulk of their jobs today are made to add extravagance to private residences. Though they also serve millwork companies, who carve basic patterns for furniture and moldings on their own machines, then have Decorators Supply add elaborations in “compo,” or composition ornament.

While plaster moldings remain a significant fraction of their business, Steve says compo adds up to about 60% of their output. Compo is a thermoplastic made popular in the 18th century as a cheaper substitute for wood carving, but it is still 4 or 5 times more labor intensive than plaster moldings, which come out of the mold virtually ready to install.

On the other hand, compo can be molded to a finer level of detail than plaster. Because it’s still pliable out of the mold, it can also be squeezed, or stretched, or curved over rounded surfaces. In its soft state it’s sticky, so it self-adheres, and it dries to a durable finish that can be stained to look like wood – in fact it will pick up the grain from the wood carving used to make the mold.

Compo finish once carried a certain mystique: the mixture was said to have origins in the Italian Renaissance, and recipes were passed on as carefully guarded secrets. But most of them boil down to a few basic ingredients. 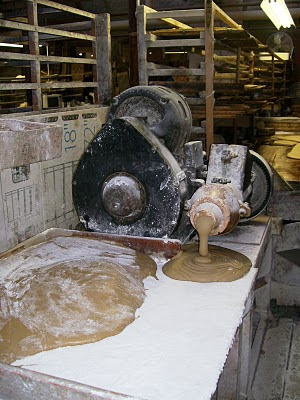 A batter of hide glue (sticky and pliable) and linseed oil is mixed with pine rosin (a hardening agent), and then kneaded into a dough with chalk, or whiting (a filler). The dough hardens at room temperature, but can be softened again with steam heat.

Decorators Supply uses a recipe brought from Europe that includes molasses. They used to get glue boiled from hides at the Union Stockyards; now it’s shipped from a rendering plant in Texas. To mold a decoration, they steam the dough in 150 year old bagel ovens. The kneading is done on a table with piles of whiting to prepare a smooth surface, and then pressed into a mold, which is compressed in a screw press to force the material into the tiniest crevices. 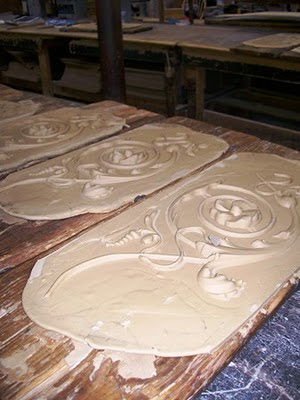 When the mold is removed and the dough cools, the pattern sets but the mixture is still rubbery, so the pattern can be sliced off the surface of the excess material with a very sharp blade. The excess can be re-steamed and reused. The patterns are kept on big cookie sheets. When it’s time to use them, they’ll be warmed, and made sticky, over a steam table, and then affixed to wood background, usually one built out of poplar in Decorators Supply’s woodshop, but sometimes they’re affixed to furniture, picture frames or woodwork built by other companies, and then shipped on to be finished with stain or gilt. 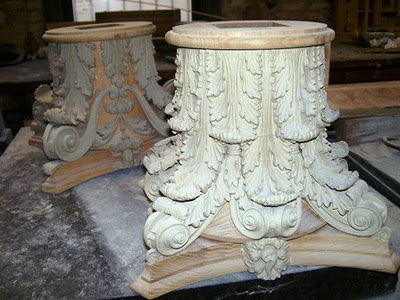 Steve says the capital of this column was layered with 60-70 distinct pieces of compo. He says they will sell it for $400 to $500, which is a bargain considering how many times the craftsman will touch it. Steve says the customer may pay 3 times as much for the finish, depending on what it is.

In 1918, near the height of a highly ornamented era, Decorators Supply reported about 150 employees and $500,000 in business a year, roughly $7.2 million in today’s dollars. Demand for ornament slowed when mid-century modernism took hold. Today, Decorators Supply employs 20 union craftsmen on the shop floor.

They are widely recognized as “manufacturers of the largest selection of classical ornament in the country,” according to Beaux Arts, a Maryland based company that advertises patterns they’ve developed in collaboration in Decorators Supply.

Others have been less above board about borrowing. Some 25 years ago, a prospective customer requested an unusually large number of samples, and those patterns are now available through the catalogue of a California based competitor.

When it comes time to refurbish Bridgeport’s own Ramova Theater, Bridgeport can secure a genuine sample of Decorators Supply's much imitated craft for new generations to enjoy.
Posted by Kristin Ostberg at 9:32 AM

Email ThisBlogThis!Share to TwitterShare to FacebookShare to Pinterest
Labels: Buildings