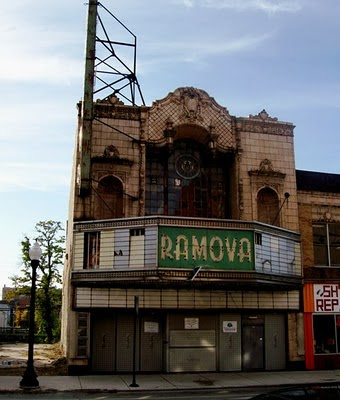 As a kid in Bridgeport, Maureen Sullivan could meet up with her friends and stroll over for a movie at the Ramova Theater without asking anybody’s parents for a ride. She says school kids are awed when she describes that to them now. The Ramova was where she saw Carrie, and waited in a line that snaked down the block for the opening of Jaws.

Maureen describes passing the shuttered façade today as seeing an old friend on her deathbed. She used to say “I wish someone would do something with that theater” nearly every time she passed it, until her husband Rob Warmowski suggested they do something about the theater themselves. They launched the Save the Ramova campaign in 2006.

Today, between paper and online petitions, they estimate they have assembled about 5,000 unduplicated signatures of people who want to see the Ramova restored. Rob does a quick tally and compares that to roughly 11,000 voters who cast ballots in the 11th ward in this year’s mid-term elections. Though support for the Ramova isn’t limited to the 11th ward. “I get e-mails from people in Italy,” Maureen says for example “wanting to know if I’m accepting donations.”

Maureen doesn’t want to start collecting donations until there is a real development plan for financing renovations. But a real development plan will be one step closer in the coming months. The Illinois Institute of Technology has taken up the Ramova as the subject for its Interprofessional Projects, or IPRO, Program. Over 2-3 semesters, an interdisciplinary seminar will draw up designs, do market research, and assemble a feasibility analysis for the redevelopment of the Ramova Theater in a new version of its old glory.

When the Ramova first opened in 1929, an amusement boom was transforming the Chicago landscape. Historian Scott Newman charts that boom on his web site Jazz Age Chicago, and links it to the development of the “modern lifestyle” that took hold in the first decades of the 20th century.

Droves of people were migrating from small towns to the big city, where their social ties were looser and their jobs were more monotonous. Newman says leisure pursuits took on new importance as a vehicle for personal identity and fulfillment. He points out that the new public venues built to supply cheap amusements -- department stores and pleasure parks, but especially theaters of all kinds -- also created an arena for unprecedented mixing among social classes. Anyone could participate for the price of admission; once you were inside, he says, the way you earned the price of the ticket was not so important.

The post-modern lifestyle is less supportive of mass entertainments. Theaters have gradually given way to television, HBO and Netflicks subscriptions, and new social venues often draw more specialized crowds. Maureen says there were once 12 theaters in Bridgeport alone, the Ramova was just the last one to close. Today, Bridgeport’s art galleries may have achieved a density theaters once had – they draw patrons from further afield, but from narrower niches.

Still, the Save the Ramova compaign has proven a strong current of nostalgia for a venue with a more general appeal persists. From students in the classroom, to officials in public office, to the buzz of friends on the Campaign’s Facebook page, people resonate with memories of the old Ramova. They also respond to Maureen’s appeal for reinventing the theater as a cultural center-point for Halsted Street – one where patrons of all kinds would rub shoulders, and bring their kids.

The Ramova is a sister theater to the Music Box, except larger, with 1,500 seats to the Music Box’s 850. Both theaters opened in 1929, and they shared a Spanish courtyard decor, with twinkling lights in the ceiling, simulating stars in the night sky. Fifteen years of water damage have destroyed a lot of the Ramova’s décor, however. It would be hard to cover the cost of renovations with $10 movie tickets.

A little picture of the Ramova's interior, borrowed from the Ramova Theatre's Facebook Page

Maureen enlisted architect Rob Vagnieres to produce schematic drawings that show a more varied mix of revenue streams: something similar to the Beverly Arts Center, or the Historic Portage Theater, which is home base for the Silent Film Society, but which hosts a wide variety of events, and supplements ticket revenues with beer and wine sales.

She also ferreted out the company that did the original ornamental plasterwork, and which is still in business a few blocks away. Decorator’s Supply has been practicing the craft of plaster and composition ornament since 1883. Tucked back behind CL Doucette on Morgan Street, they keep a vault with tens of thousands of original wood carvings for decorative molds, and employ 20 skilled craftsmen in a venerable trade. Stimulus for a historic Bridgeport business would be just one of the other good things renovations at the Ramova could bring.

The city of Chicago issued a request for proposals for redeveloping the Ramova in 2002, and managers of the Silent Film Society were among those who looked it over, before they settled on the Portage Theater instead. They didn’t return calls to comment on the Ramova now, but one party in their troupe recalls they believed the project was physically doable “with money and time;” they were less sure that the neighborhood, as it existed 5 years ago, would draw an audience, either from within, or from without.

Maureen is sure that has changed. University Village is closer than it was 5 years ago, and more people come from elsewhere to attend Bridgeport cultural events every year. But more important, she has proven there is a strong local audience for the Ramova, eager for it to open its doors again.
Posted by Kristin Ostberg at 7:15 AM

Email ThisBlogThis!Share to TwitterShare to FacebookShare to Pinterest
Labels: Buildings