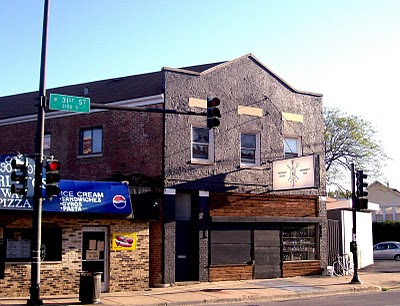 When I first moved to Bridgeport, Maria’s was the little bar at the top of Morgan Street with a sign that said Kaplan’s Liquors out front. I went in there looking for Ed Marszewski, Maria’s son. Ed is the kind of guy who seems to be everywhere, but he’s nowhere to be found if he’s not sure he wants to talk to you. I spent a few nights on a bar stool, chatting up drunk city-parks workers and guys my own age who’ve lost all their teeth. And while I waited, Maria told me about how she launched a modest business empire by doing ladies’ hair.

She had come to the States as the bride of a former US Serviceman, who’d met her in Korea and gone back for her after his tour was up. [The story of how he courted her, coached by the local priest, is one she should tell you herself.] Back in the States, her husband was diagnosed with bone cancer while they were both still young. He was astonished to find she had saved enough from hairdressing to take him on a tour around the world. After he died, she stepped in to run his bar. That was a different bar, on the north side.

Over the years, she kept adding businesses while she raised their 2 sons. She bought buildings, apartments, hotdog stands, she even started a construction company to do her own renovations. She bought Kaplan’s Liquors in the mid-1980s. Its clientele tended toward the tougher side of Morgan Street, until it got shut down temporarily this summer, over a mistake in the sale of a pack of cigarettes. Ed Marszewski saw the set-back as an opportunity to re-open as a different kind of bar.

Maria’s son has built his own modest empire, but in an entirely different kind of enterprise. He went to art school. He settled in Wicker Park in the early 1990s, back when it was gaining momentum as a creative hotspot – back before it was gentrified. He interned at the progressive paper In These Times and launched his own paper, the Lumpen Times, with some friends.

You could call the Lumpen the first step in Ed’s career as an instigator - a news and arts monthly with a sympathy for conspiracy theories and the DIY arts – he has published it faithfully for almost 20 years now. And meanwhile, he has also developed 2 separate annual arts festivals, launched Proximity, a fine arts journal, opened a couple gallery/event spaces, and generally served as both patron and participant in what Proximity describes as a Chicago tradition of “interventionist” art.

There is a book about Wicker Park during the period Ed was out there. It’s called Neo-Bohemia, by the sociologist Richard Lloyd. It describes how artists created a “scene” in Wicker Park, one that defined itself against mainstream consumer culture and its corporate profiteers. But one that would also, along the way, attract music scouts, internet startups and new media firms eager to tap the neighborhood’s edgy caché. The new firms would hire neighborhood artists to do creative piece work. But they would also lift the rents and eventually price the artists, and their blue collar neighbors, right out of Wicker Park.

There’s an unflattering sub-plot about how artists themselves cultivated their bohemian tastes as a form of cultural capital, or “subcultural capital.” It gave them the illusion of status over the Lincoln Park yuppies, to whom they found themselves serving beer on the week-ends at the hip Wicker Park bars, to compensate for their lack of real power.

To be fair to the artists, sociologists study social dynamics -- if they seem to reduce even the most earnest human efforts to a lot of vain strivings for status, it’s because that’s what they're interested in, not because that’s all that's going on.

The Lumpen was a vocal critic of gentrification in Wicker Park. It ran stories on the machinations by which factory jobs were being squeezed out to make way for condominium conversions. Though when I eventually found Ed, he’d tell me it bothers him to think that the Lumpen was complicit in the neighborhood’s demise. “We wrote about all those band,” he says, “we hyped all those cool bars.”

By 2006 or so, Ed himself had moved the center of his operations from Wicker Park to Bridgeport. “The Community of the Future,” he likes to call it. That was the year the former department store at 32nd and Morgan, with the dusty old radios in the windows, opened its doors and turned out to be packed to the rafters with fabulous junk. The old owners tried to sell off some of it to the public, but ended up carting most of it away by the truckload. 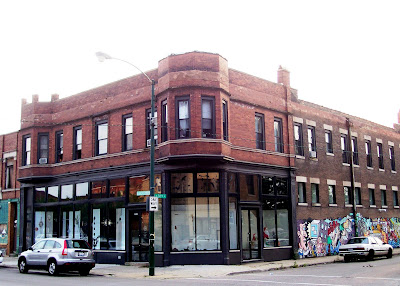 For a month, you’d walk by at night and there’d be a crew of guys in there making midnight renovations. Around Halloween, Ed opened the doors for the unveiling of the Co-Prosperity Sphere. It’s an art gallery and event venue. It’s a home base for mischief -- like Rueben Kincaid Realty, which posted window advertisements for properties “available for squat” as the foreclosure crisis overtook the overpriced housing boom.

Recently, Ed has had his second brush with sociological literature. Some students of “scene theory” wrote a term paper comparing the scene at Co-Prosperity Sphere to one at the Zhou Brothers arts complex down the street. Scene theory sounds like an elaboration of some of Neo-Bohemia’s themes. It proposes to define the elements of different kinds of social scenes, and measure their impact on the cities that have them across a nationwide database. If it works, city planners could, theoretically, attract specific kinds of workers to live in a neighborhood by developing the right amenities there.

In fact, it seems obvious Ed Marszewski’s arts conglomerate must work as an economic development engine, even though he’s not eager to brag about it that way. Single events at the Co-Prosperity Sphere draw hundreds of people from around town; the arts festivals, which include Version Festival in the spring and Select Media Festival in the fall, draw thousands. Artists from the Netherlands and Scandinavia fly to Chicago to attend.

Will that mean Ed’s arts empire will fuel a Wicker Park style gentrification of Bridgeport the next time a development boom comes around? It might. But in the meantime, there’s another model next door. In Chinatown, revenues from restaurants are reinvested through Chinatown based banks, into home loans, development projects and other neighborhood businesses, helping to make Chinatown one of the most stable, and most prosperous, ethnic enclaves Chicago has ever had.

Artists don't always have money to invest. But the Co-Prosperity Sphere seems to have a special sympathy for arts projects that build alternate economies, networks of reciprocal exchange. Proximity describes new ones every month, and recently published a catalogue of them – soup suppers held to raise money for micro-grants, community gardens in scraps of vacant land, lending libraries, skill swaps and “generosity give-aways.”

The Co-Prosperity Sphere appears to be a vehicle for financial reinvestment too. Progressive newsmagazines and arts journals are expensive to print. When you ask Ed how he pays for them, he says he does it by working three jobs. And if Ed can cross-subsidize within his own conglomerate, use revenues from music shows and beer sales to publish Proximity, for instance, that could be a good reason to visit Maria’s, in its new incarnation as purveyor of cocktails and artisanal beer, and make a micro-investment in the Lumpen, Proximity, and whatever happens next at the Co-Prosperity Sphere.