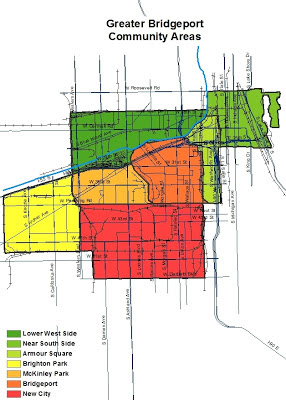 By one measure after another, the housing market stuttered back to life in 2012. Home sales sped up, prices rose, new construction re-started, giving the drywall industry a boost. For New Year’s, Trulia’s chief economist observed the glut of unsold homes dropped through 2012, and predicted the question for 2013 will be at what point inventories will hit bottom, so the rebuilding can start in earnest.

Nationwide, a share of those inventories are being sopped up by investors. Frustrated by low interest rates and poor returns on other kinds of investments, they have been buying up foreclosed properties in bulk, at discount, and renting them out. That’s probably good for owners who want to sell, but less good for small buyers with less easy access to financing, and it’s not so great for the neighborhood either.

In the 1970s, financing was so scarce in urban neighborhoods, especially low income and minority ones, that Congress passed the Home Mortgage Disclosure Act, requiring banks to report where they were lending, and to whom, in detail. The numbers take awhile to assemble, regulators make them public in fall of the subsequent year, which is too late to show the latest ticks in the housing market. But it still shows how banks impact neighborhoods over time.

The activity of big investment firms won’t show up there – where they buy whole portfolios of foreclosed properties from banks, they aren’t taking out home mortgages to do it. But the HMDA reports show that investors have been buying up individual properties too. In Chicago, loans to non-occupants started to pick up in 2010; they continued their increase through 2011, even as overall mortgage lending continued to decline.

In Greater Bridgeport, the Home Mortgage Disclosures show the impact of lending practices that look like redlining in reverse. The neighborhoods south and west of Bridgeport enjoyed an abundance of loans during the boom. These tracts, spreading through Brighton Park and Back of the Yards, have lower incomes and more minorities than many tracts in the eastern part of the map. They were also the neighborhoods where loans dropped most sharply during the bust. Of course, lending reached new heights, then plunged, almost everywhere. In the Chicago area, the boom was fueled as much by existing homeowners repositioning themselves, and sometimes cashing out new value from their homes in the process, as by actual property sales.

But after the bust, refinances were still available. They were made less frequently than at the height of the boom, but they did not drop off so sharply as home purchase loans. And they surged in 2009, the year federal, state and county programs to avert foreclosures came on line. Foreclosures mounted anyway, but the ability to refinance probably helped slow foreclosures from mounting faster. Refinances have kept far ahead of foreclosure filings across the region as a whole. 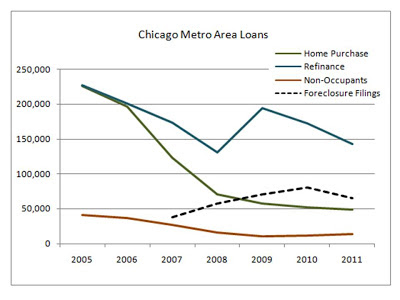 That hasn’t been true everywhere. Among the neighborhoods that surround Bridgeport, New City, the community area that combines Canaryville and Back of the Yards, makes a striking example. New City topped the chart of loans made in the area in 2005. Then it fell to the bottom of the chart.

A closer look at loans made in New City shows that refinances dropped off less sharply than home purchases, but they did less to cushion the crash than elsewhere -- the refinance revival of 2009 didn’t show up in New City at all. Foreclosures overtook home purchases quickly, they peaked in ’08 and were declining by ‘09, but they still surpass home purchase and refinance activity combined. 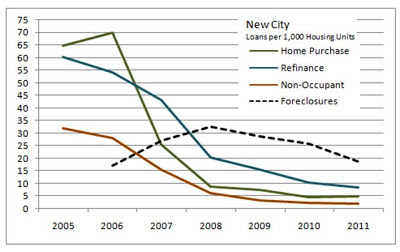 Something similar happened in Brighton Park – a neighborhood that rivaled New City for loans during the boom. That might make the subsequent abundance of foreclosure look like a natural outcome of excess activity during the boom. 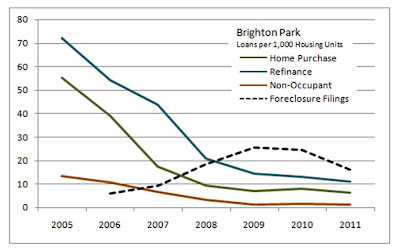 But compare Brighton Park to the progress of the South Loop – whose high-rises stand testament to an hour of fabulous optimism. The Near South Side captures the South Loop south of Roosevelt Road. The Census shows most of its housing units were built after 2000. Home Mortgage Disclosures shows home purchases fell abruptly after 2006, but refinances lurched into the gap. Foreclosures have been on the rise in the South Loop , but they gathered steam slowly, refinances still far surpass them, they have yet to catch up with new home purchase loans. 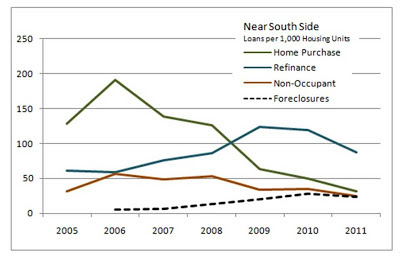 In comparison, the Lower West Side, which captures Pilsen, south of 18th Street, was a study in moderation. Other indicators may show gentrification, but loans in the Lower West Side were made on a more modest scale than anywhere else in the Bridgeport area. Tracts in the Lower West Side share median incomes and minority populations in line with those of Back of the Yards and Brighton Park. They also share a similar pattern, if not volume, of loans: refinances dried up along with home purchase loans; foreclosures surpass them both. 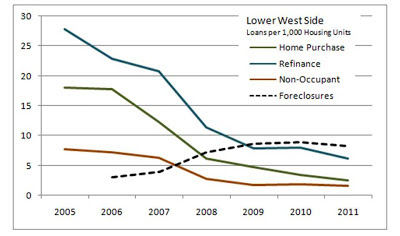 Access to refinance can help avert foreclosures, so it seems unfair that borrowers in neighborhoods like Back of the Yards and Pilsen are getting fewer of them than borrowers in the South Loop. If a borrower is uncredit worthy, a refinance won’t fix that, but many loans must fall in a gray area, where banks weigh the cost of re-writing a more realistic loan against the cost of holding a foreclosed property as it deteriorates. And you would think investors would prefer to own a passel of properties in the South Loop.

At any rate, a single investor-owned property can wreak havoc on the neighborhood fabric, whether it’s vacant, or leased to tenants whose landlord can’t be reached. That has become clear in Bridgeport, where the tenants of absentee landlords have proved to be a tenacious problem on blocks of Carpenter, Lituanica, Union and Wallace.

And Bridgeport has stayed a moderate course during the boom and bust. Home purchase loans dropped after 2006, but refinances recovered. Foreclosure filings rose, they eventually reached the same rate as those in the Lower West Side, but they’ve done it gradually and then dropped off. A property in Bridgeport is still more likely to be purchased than foreclosed. 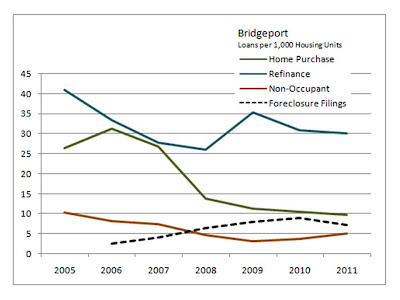 Armour Square, Bridgeport’s eastern neighbor, enjoys a similar pattern with even fewer foreclosures. McKinley Park falls somewhere between Bridgeport and Brighton Park: refinances showed some resilience, but foreclosures surpassed home purchases in 2009, and continued to do so through last year. 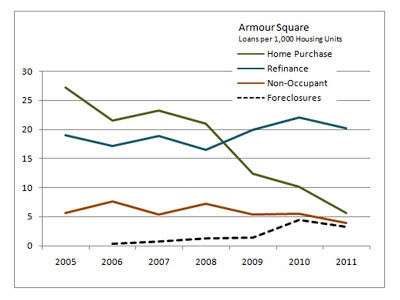 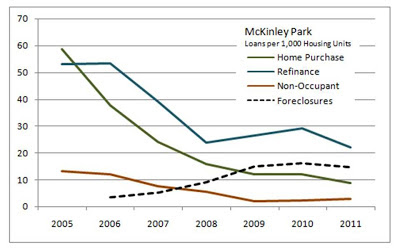 By 2011, residential lenders clearly favored Bridgeport. Armour Square’s loans were mostly made in Chinatown. Loans were made at a more moderate rate through Canaryville, and out the Archer corridor through McKinley Park and Brighton Park. 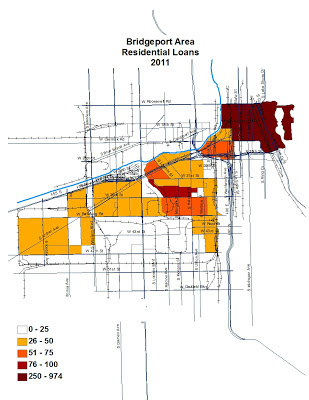 But overall, lending activity was still dropping in 2011. There were fewer loans in most places and in most categories than in 2010. The exception is loans to non-occupants -- those have been on the rise across the metro area for 2 years.

In the Bridgeport area, loans to non-occupants are concentrated in a few clusters, including Chinatown, and Bridgeport’s Northwest quadrant. But they are most concentrated in the census tract that falls west of Halsted Street, between 32nd Place and 35th Street -- the heart of Bridgeport’s small landlord district, it has historically had high concentrations of small apartment buildings whose owners live in the building. 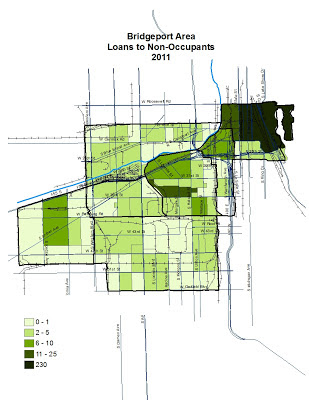 Citimortgage and JPMorgan Chase are the community’s top lenders, a position they held on the eve of the financial collapse. Citimortgage made 65 loans in Bridgeport in 2011, JPMorgan Chase made 81. For comparison, locally owned Pacific Global, a Community Development Financial Institution that has ranked among Bridgeport’s top lenders throughout the boom and bust, made 30 loans in Bridgeport in 2011, less than half the volume made by each of the big banks.

They were also making different kinds of loans. The big banks were mostly refinancing loans for existing owners. All but 4 of the loans JPMorgan Chase made in Bridgeport were refinances, for instance, and a quarter of them were made to non-occupants. In fact 10 of Chase’s loans to non-occupants were concentrated in the small landlord tract west of Halsted, between 32nd and 35th. Pacific Global’s 30 loans were all loans for home purchase, they were scattered throughout the neighborhood, and only 3 of them were made to investors who wouldn’t occupy the homes.