The Bluesman and the Bar 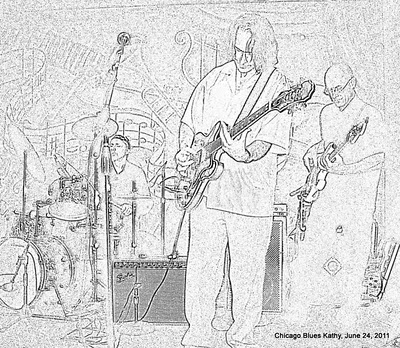 Rockin’ Johnny Burgin and his band will be playing at Bernice’s this Saturday, Sept 24th. You should go and hear them, they’re a fresh blues band with traditional roots. And you should show up before the music starts to get a feel for Bernice’s, it's a thinking man's drinking bar.

I walked in and saw Johnny playing there last year – I couldn’t believe it. The last time I saw him play was in the 90s, we were both in our 20s, and he was probably playing at the old Checkerboard Lounge – a respectable venue at 43rd and Vincennes.

People used to say he was really going somewhere with that guitar. He’d learned blues at clubs that don’t exist anymore, playing with older black guys, many of whom have died. He built his own following at Smoke Daddy’s as Wicker Park’s “urban hipster experience” was taking off. “All the blues musicians came out,” Johnny says. “People who didn’t like blues liked our band.”

Then sometime around 2001 he dropped off the face of the earth. Or he seemed to – he’d settled down into a quiet suburban lifestyle for awhile.

Now he’s back. He’s got a band with as much “classic upbringing” as he had, and they’ve been accumulating great reviews. They play all over Chicago and the Midwest, from BluesFest to Berwyn, with occasional European tours.

But it seems most appropriate to see them at Bernice’s. Johnny says a lot of people from his Smoke Daddy days have turned up there. They have things in common, the bar and the bluesman. The most literal one being that they’re both making comebacks. 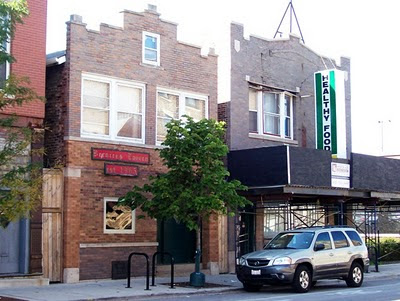 The Bar:
There’s been a bar at 3238 S. Halsted since Prohibition. It was called Adam’s Place, until John Badauskas bought it in 1965. He named it after the woman who would be his wife. There’s a painting on the wall of a black haired beauty they say is the spitting image of young Bernice – it was already there behind the bar when John bought it.

Halsted was a different street back then. It was filled with stores and bustling with traffic. You could go outside and hail a cab, John’s son Steve recalls. That was significant, because the bar was also situated in a different drinking culture.

Steve Bedauskas grew up in his father’s bar. He recalls 9 other bars between Bernice’s and the 4 corners of 31st Street. He can name at least another 7 to the south. And Bernice’s opened at 10 in the morning: patrons would come in on their lunch break, or they’d come in to drink before work.

There weren’t a lot more people in Bridgeport then, they just spent more of their time drinking in bars. And maybe no one would argue the neighborhood was better off when half the population patronized taverns every day, starting at 10 in the morning.

But the culture where people came out regularly to rub shoulders, not to preen and pose the same way you might at a Saturday night club, but to shoot-the-shit and build tavern-style camaraderie, seems good for the civic cement. 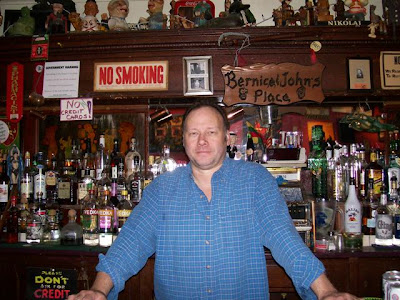 Steve took over Bernice’s 12 years ago, after his father died, with help from his brother Mike, who mans the bar 2 nights a week. By then, the regular crowd had dwindled down to 1 or 2 guys. “It was depressing,” Steve admits, recalling long lonely evenings behind the bar.

Before he was a full-time barman, Steve was a machinist -- he specialized in equipment for binding books -- he’s good with his hands. He took up painting around the time he took over the bar. He’d paint on the cardboard the beer came in.

Paintings on cardboard were a genre for a series of art shows, “Bridgeport Primitive,” as Steve put it once. Some of his early works are on the wall of his bar.

Meanwhile, he set about building a new base of regulars. He started an open mic night right away, drawing on his musician friends. More recently he launched Stingo on Wednesdays – that’s Bingo, MC’d by Steve. It turned out to be wildly popular.

Now Steve doesn’t have time to paint. He jokes that he still runs the bar basically as a non-profit. But he has created a bar that draws one of the best assemblies of character in Bridgeport.

I was just there last week. I spent an evening talking to Chopper, a union carpenter with impressive mustaches who favors the vehicle his name implies, and to Carl Segvich, Bridgeport’s most persistent Republican candidate, and to John Salhus, an artist, who pays the bills with a job doing fine art restoration for a company on Cermak Road.

I first walked into Bernice’s 5 years ago. I’d walked by it for a year before I went in. It looked dark through the window, and the door is locked, you have to ring a bell to get buzzed in. But that night I had conversations I can still repeat to you now.

One of them was about Bridgeport’s racist reputation. I was still new in the neighborhood. I can’t remember how I brought it up, or why I thought it was a good idea. But my fellow conversationalist wasn’t perturbed. He thought a second, then he said “A lot of that reputation’s deserved.”

He grew up in Canaryville, which isn’t known for racial tolerance either. He described chasing black kids out of his neighborhood with his friends, but then he described getting beat up himself by the kids at Armour Park, and knowing while it was happening that it was basically the same thing.

He also had happy memories – of hunting rats in the ruins of the stockyards. “That was our wilderness!” he told me warmly. And touching present concerns. His 16 year old daughter wanted to get her face pierced. He was against it; she thought he was a tyrant.

“What do you think about that?” he asked, as if I might have some insight into the custom. I thought he should hold her off as long as he could – who ever regrets that they didn’t get pierced sooner? But I don’t know how it turned out.

And that’s still one of the best examples I can think of what Bernice’s is like. It isn’t the "hippest" bar in Bridgeport. It’s probably not the most authentically “Bridgeport” of bars. But it’s like the pumpkin patch where Linus might finally have been justified, it’s the most sincere. 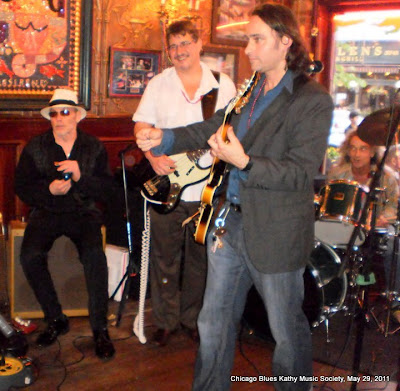 The Bluesman:
As a kid learning guitar in South Carolina, Johnny Burgin didn’t know a career in music was possible. Then, as a college student in Chicago, someone brought him to a west side blues club and he heard Taildragger play. “It changed my whole direction,” Johnny says.

Soon, he was playing with Taildragger at his west side gigs; then he was touring the country with Howlin’ Wolf drummer Sam Lay. He describes it as a “tried and true career path,” learning by playing with the older guys who’d mastered the form.

“It’s a conservative style of music,” Johnny says, describing the blues. “It’s not incredibly hard to understand. A lot of people can play it. It’s how you choose to execute a simple set of rules.”

That’s where the musician’s individuality comes in, “to play with style, with feeling,” that’s what the west side audiences loved. “You listen to records, and there’ll be a riff, and you think ‘The audience must have been going crazy when he did that!’”

Blues music doesn’t play on popular radio anymore, it hasn’t for a long time. But when Smoke Daddy’s opened in Wicker Park in the mid-90s, Rockin’ Johnny (a nickname he acquired as a college radio host) got a regular gig there Monday nights, just as Wicker Park was booming. He built a following, introducing an unlikely crowd to a traditional form.

Ten years later, Johnny emphasizes the ways the scene is the same. When he began playing shows on the road, he says fans showed up with CDs he’d made in the 90s. And there’s a new crop of exciting young musicians out there.

But he admits some of the clubs have closed. Some of the musicians he knew have died. Or more alarming, they’ve gotten old. “I have a vision of them, playing strong like a bull!” he says.

Maybe Johnny is reluctant to focus on what’s changed because blues aficionados have been mourning the blues for decades. In the 60s and 70s, some fans fetishized the pre-war players; in the 90s, some fetishized the guys who’d been around to play with Little Walter and Howlin’ Wolf.

It’s a sentiment that’s easy to ridicule. And when I first saw Rockin’ Johnny at the Checkerboard, I ridiculed it. I’d just ducked out of divinity school, I was looking for an article to write. I thought the “real feeling” that was supposed to animate the blues sounded like a gnostic concept, something rarefied, and recognizable only to the select. Which seemed wrong, if blues really got its power from being a working man’s music.

Since then I’ve seen the same sentiments better treated in books: sociologists parsing the Chicago blues “scene,” and historians tracing the white man’s re-definition of a popular black form. I wouldn’t argue that they’re wrong about social dynamics.

But I’m more sympathetic to the experience of the person who loves the sound. I can imagine the same critiques applied to the sphere of Bernice’s – it would discern social posturing in the conversation I just described, or in my claims to know sincerity when I see it. But that critique always brackets the feeling of the buzz from the beer, and the impact of the conversation itself.

Johnny admits the “classic upbringing” he enjoyed, touring as a sidemen with the masters, is less available today. “But it’s not all over now, just because Honeyboy Edwards (the last guy who could claim to know Robert Johnson) is dead.” There is still a new crowd picking up on the form.

His west side heritage still helps him. When he flies into Europe for instance, having a leading guitarist from Chicago is a big addition to a club’s line-up -- a link to the style of Howlin’ Wolf.

But his own favorite guitar player is Django Reinhardt, an ethnic gypsy who recorded in the 30s and 40s. He brings it up as an example of how older forms persist, they get picked up and absorbed by younger players. If the old clubs close, new fans find it on YouTube.

If anything, Johnny is optimistic there’s more opportunity now. Recording technology is cheap, and social media puts marketing power in the musician’s hands. “My last CD cost $3,000, and they played it on XRT. So it was engineered well enough to play on a major radio station.”

His next album will be produced by Delmark, a Chicago label that’s home to Junior Wells and Magic Sam, to bring a traditional form to a new audience. “Every 10 years, a new group of musicians discovers the blues,” Johnny says with confidence.