Modern Jazz and New Vision for the Public Library 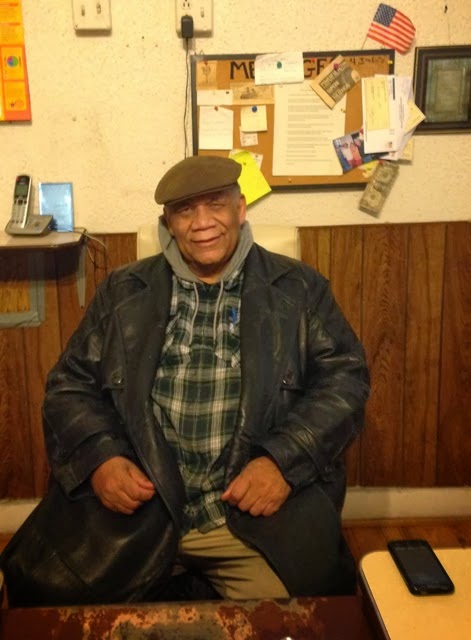 Frank Chapman has had a long career as a jazz pianist, playing in the be-bop style of Charlie Parker.  He shakes off the suggestion that jazz is for sophisticates, he says be-bop came out of dance halls.  In fact, he learned to play it in jail, where he found himself as a 19 year old, surrounded by older musicians from Saint Louis and Kansas City.  They’d all been locked up for drug charges, not violent crimes; they passed the time playing modern jazz.

For 30 years after that, Chapman played in New York, the nation’s jazz capital, but he has lived in Bridgeport since 2011, and one day soon, he will perform a show at the Richard J. Daley branch of the Chicago Public Library (3400 S. Halsted).  The date has not been nailed down yet, but it will be the next in a series of music shows for adults that Branch Manager Jeremy Kitchen launched last fall.  It grew out of an experiment in programming at the Chicago libraries.

The explosion of the internet has inspired some creative soul searching among librarians in general.  A public repository of books seems less necessary to supporting a literate public, now that the internet gives easy access to oceans of information.  Libraries have found new roles, like providing digital access, and promoting informational literacy – a step beyond the ability to read, informational literacy includes the ability to find what you want from out of the superabundance, to evaluate and use it.  And the physical library is still a great asset.

Recently, researchers at Heidelberg University ranked 31 world class library systems, from Stockholm to Sao Paulo to Singapore, based on features that contribute to the vitality of the Informational City.  The ranking gave equal weight to features of the digital library (like e-documents and digital reference services) and the physical library (particularly its architectural presence, and its spaces for learning, meeting, play and work -- the book collections weren’t one of the factors on the list).

After all, the Information Age has not been built on media alone.  It is said that the advent of the printing press and the wide circulation of new media helped give rise to a new kind of public sphere.  People began to understand themselves to be part of a common conversation -- they might be geographically dispersed and socially stratified, but they were also participants in the ebb and flow of public opinion.  Books, pamphlets and newspapers made that common conversation possible.  But so did the coffeehouses and clubs where they were debated and discussed. 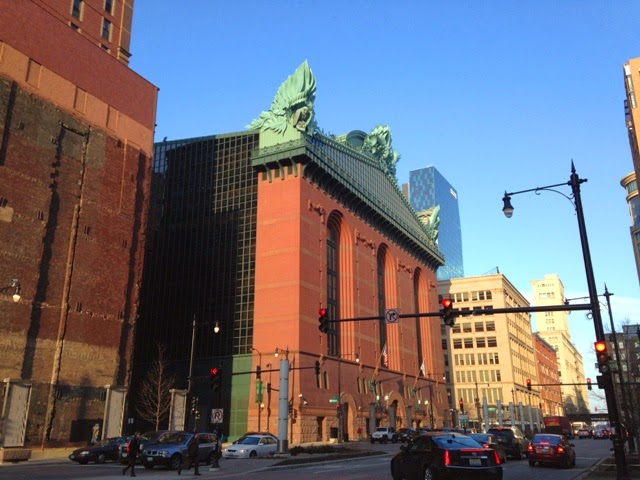 When the Heidelberg researchers ranked world library systems, the Chicago libraries came out first among the cities in the United States, and third in the world, after Vancouver’s and Montreal’s.  Chicago scored slightly better as a physical library than it did on the digital scale.  That’s testament to decades of capital investment.  Mayor Daley’s Library Commissioner, Mary Dempsey, enjoyed overseeing the construction or renovation of 44 libraries in the 75 branch system.

Then Mayor Emanuel came in on a promise to be tough about the budget, and he seemed to see the library as an easy target for cuts.  He first proposed to make half his staffing cuts from library personnel, even though library operations represented just 3% of the city budget.  Commissioner Dempsey resigned.  Emanuel picked an IT executive from the San Francisco library system to replace her.

But Commissioner Brian Bannon has shown no interest in replacing Chicago’s physical libraries with a cheaper collection of e-books. Several of his technology projects make spaces for new patrons, like the YOUMedia Center for teens, and the MakerLab, a temporary skunkworks project that won a Chicago Innovation Award last year.

In fact, Bannon has outsourced a big piece of the library’s IT work, signing a 3 year contract with BiblioCommons to maintain a state of the art digital catalog system.  He told Library Journal that the contract wouldn’t just provide a better catalog, it would cut the need for in house technical expertise so librarians could spend more time curating the collections and engaging the community.

In June, the CPL Foundation won a million dollar grant from the Bill and Melinda Gates Foundation to try a more innovative way to develop library programs, in partnership with a firm called IDEO, and the Aarhus Library system in Denmark.  Aarhus is a city a tenth the size of Chicago, but it’s known worldwide in library circles for its progressive programs.  IDEO is a high profile innovation consultancy known for its “design thinking” approach.

Design thinking explores what people want, and how they actually use things, and proceeds by trial and error: you don’t spend months analyzing a problem and drafting an ideal solution, you start by brainstorming a bunch of ideas, trying them out, discarding the ones that don’t work without wasting too much time on them, and building on the ones that do. 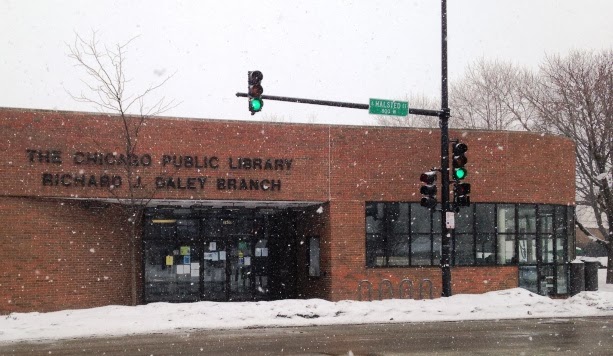 Jeremy Kitchen has been particularly active with the library’s experimental programs.  He served as children’s librarian at the Richard J. Daley Branch in Bridgeport for 7 years; he was promoted to Branch Manager shortly before Commissioner Bannon was hired in early 2012.  Last summer, Kitchen was part of a team who traveled to a library conference in Aarhus, and got a glimpse of the Danish model firsthand.  Some of Aarhus’ innovations deploy digital technology in new ways.  But Kitchen says what struck him most was the role the libraries played as community space.

The Danes stood back to reassess the purpose of their libraries too, back in 2010, which was also a time of budget cutbacks.  They determined they wanted their libraries to cultivate a society of innovation to further Denmark’s globalization goals.  Libraries would be places of learning, but also places of creative inspiration, fueled by participation in arts and performance, and just by putting patrons into contact with other people who might have different tastes and opinions than their own.

Under the Gates Foundation grant, the Chicago libraries tried 3 prototype projects with broadly similar aims.  Kitchen organized one of them at the Daley Branch in collaboration with the Valentine Boys and Girls Club: it was a sort of creative projects fair for teens.  The library auditorium was set up with stations where the kids could try different activities.  Some involved technology – like a station with musical instruments and music apps that are available free on the internet.  Kitchen says the most popular stations were analog – like the electric typewriter with a long scroll of paper in it, where people could add a sentence or two on an Exquisite Corpse style narrative.

Since then, Kitchen and the team have continued to take the design thinking model on the road, trying out projects at branch libraries in other neighborhoods.  In one of them, a group of teenage boys took selfies.  That was at Legler Library in West Garfield Park - one of the city’s grandest regional libraries at the center of one of its most dangerous neighborhoods.  The teens were all tattooed.  So is Kitchen -- his forearms are covered with colorful kid-friendly designs from his days as a children’s librarian, including a gentle looking giraffe, and a unicorn with a balloon.  They ended up trading stories and documenting their tattoos. 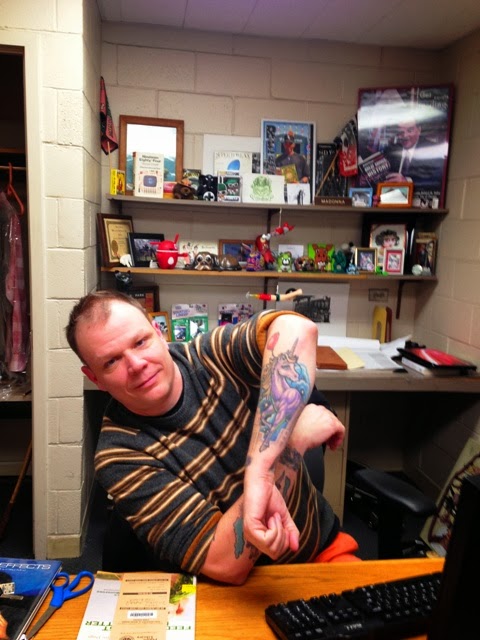 Though “documenting” suggests a structured purpose, Kitchen emphasizes the project was deliberately unstructured because the point is not to recreate an instructional environment like school.  The point is to engage the kids in a project they want to do, to encourage them to see the library as a resource they want to use, even as a safe place to hang out.

Kitchen, who was once a social worker, says the young men who came in for the project don’t have a safe place to hang out – they’re immersed in an environment where one bad decision, their own or someone else’s, could change their lives at any time.  His description of the way their surroundings limit their lives hints at the value the library could have if it could open a sense of access to a broader sphere.

Media alone doesn’t do that – the kids already have access to media.  Last summer Wired magazine published a feature about how social media helps inflame gang violence in Chicago neighborhoods, it can just tie people in to a vicious feedback loop.  We all need some sense of a larger world, a sphere of possibility that extends beyond the place we’re standing at any given moment.  The Danish model of the physical library as an inspirational space seems to aim for something like that.

Back at the Daley Branch, Kitchen says the idea to open the auditorium as a neighborhood performance space was directly inspired by his visit to Aarhus.  The music shows aren’t curated performances that the public ought to hear; they are an opportunity for a creative neighborhood exchange.  The first show, in October was by Fast Decay, a punk band from Back of the Yards.  Kitchen says 50-60 people attended, including small children and senior adults – many of whom would probably never hear punk rock in its usual habitats.

Next, you’ll have the opportunity to hear Frank Chapman perform modern jazz.  It sounds like a promising show, whether you’re already a jazz fan, or just open to hearing something new.
Posted by Kristin Ostberg at 10:14 PM 1 comment: