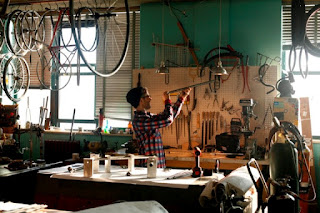 Chicago’s hand built bicycle industry has gained momentum this year, and Bridgeport builders are still at the front of it. The custom builders at Bubbly Bicycle Works, the frame builders co-operative founded by Owen Lloyd [and described on The Hardscrabbler in January 2011], have been joined by Legacy Frameworks, a small batch manufacturing company.

Manufacturing jobs have a good reputation in the US, people sometimes forget they haven’t always been ideal. The industrial revolution was hard on workers. The jobs were dirty, dangerous, and poorly paid. They were also unskilled and tedious, labor was reluctant to give up their sense of craftsmanship and meaningful work.

Labor unions helped change that, but so did owners like Henry Ford. Ford’s great innovation as an automobile manufacturer had less to do with the efficiency of his assembly lines [similar efficiencies had been achieved before, at the Stockyards for instance] than the bargain he struck with his labor force, who agreed to show up reliably for impoverished jobs, in exchange for a higher wage. And paying better wages helped create the market for Ford’s new cars.

Ownership’s commitment to that bargain has wavered in recent decades, so it’s satisfying to see some of the labor force making its way back to the old way of work, even if their numbers are still pretty modest. 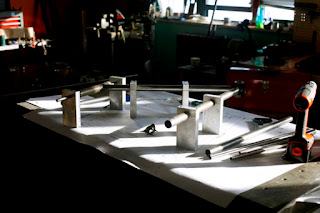 Nationally, the hand built bicycle industry grew gradually for decades, then took off around 2005, the year the North American Handmade Bicycle Show (NAHBS) launched its first event. Don Walker, NAHBS founder, estimates there might be 50 craftsmen earning a living building custom bicycles in the US today, and another 150-200 who supplement their income that way. In fact, a few US builders have grown to factory scale production, employing dozens of skilled craftsmen to build bicycles by hand. Jay Townley, whose market research firm Gluskin Townley Group, LLC tracks the bike industry, estimates US hand-builders sell 30,000 bicycles a year.

What they charge can vary widely, depending on what a patron wants. A complete bike from Method or Humble typically falls within the $3-$6,000 range, though it could cost as much as $10,000 with rarefied wheels and wireless components.

A cyclist can buy a high quality mass production bike for a fraction of that price, and it may be superior, by some measures, to a hand-built frame. That makes it even more impressive that a growing base of customers will pay more to have something a craftsman has built by hand. 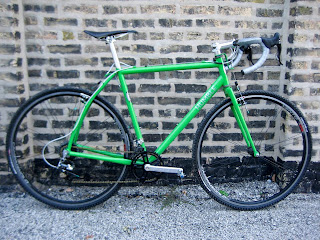 “The mass production bike industry has done a very good job of defining certain criteria that a bike should be, and then excelling at them,” Catano observes. “A bicycle that I make will never be as light, or stiff, as a single-piece carbon molded frame…. But if lightness and stiffness are not the two things you care about most, then this whole other world of things opens up.”

Lightness and stiffness are often prized in bikes built to race. Steel frames flex slightly, that can make them more comfortable to ride over jolting terrain, because they absorb shocks, but they also absorb some of the power of the cyclist’s pedal stroke.

Catano, who races cyclocross, has been refining his design on frames he’s built to ride himself. Many of the design features in his bikes, like shaping of the tubing, are calculated to build stiffness back into key points of the bike. Others are more purely aesthetic, like his painstaking bi-laminate construction technique. 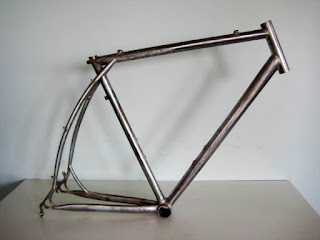 Bicycles may be welded or brazed – welding is quicker, the material of the tubes is melted together. Brazing uses a softer metal, usually silver or brass, as cement, and requires a careful hand. The tubes must be mitered to fit precisely, or the joint will be weak; the heat must be controlled evenly, or the cooling material will deflect the angle of the joint. 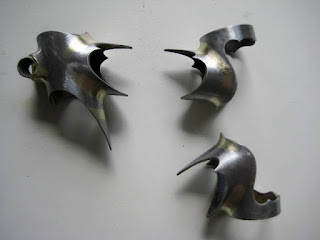 Many vintage bicycles are joined with lugs, or sleeve-like fittings. The braze seeps into the fitting to hold the tubes together. Fillet brazing joins tubes directly to each other with a ribbon of brass, which is then filed smooth. Bi-laminate technique combines the simple lines of fillet brazing and sleeves with hand carved embellishments. It’s a technique mass production builders don’t use anymore. 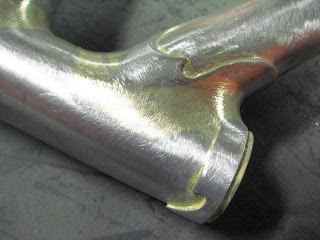 Catano describes browsing photostreams posted by fledgling builders on Flickr, showing design features they’ve borrowed at random from various sources, without really offering anything to “the larger conversation” of what a bike should be. That conversation is often conducted in subtle variations rather than grand gestures. If you consider the progress of a master like Richard Sachs, those variations might not be visible from 10 feet away.

“He’s essentially built the same bicycle over and over again, working toward this perfected idea of what a bicycle should be,” Catano says. “I think that’s what people respond to – something resonates with what a particular builder is doing, and they want to be part of that, they want a piece of that themselves.” 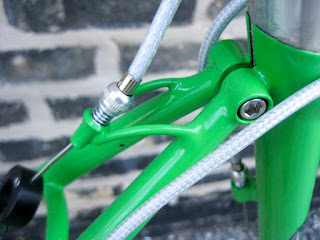 Hand built bikes are still a small part of the US bicycle market. There were 15.7 million bicycles sold in the US last year, according to the National Bicycle Dealers Association, and over 99% of them were imports. Though the market is undergoing glacial shifts. Jay Townley, of the Gluskin Townley market research firm, says imports were down by 4 million bikes last year, but sales held steady in dollar terms, thanks in part to the resurrection of millions of used bikes.

Townley says affluent male baby boomers have owned the high end bike market for more than a decade, and mass producers have been pushing their price points upwards over the last 5 years by developing high tech bikes for pro circuit teams, and then making those bikes available for sale. As the high end price point has moved from $3,000 to the $6,000 range, the price gap between mass produced and custom bikes has narrowed.
The baby boomer males are the lightness and stiffness crowd, the demographic that buys the same bikes the pros ride, but they are aging out of the market. They represent just 80% of it now, they were 88%, Townley says.

Gen Y wants different things. They’re into green design, car-lite culture; they are unemployed, but entrepreneurial. The outlines of their consumer profile are not exactly crisp. “The brands are confused,” Townley says “they don’t know what to do.”
Some of Chicago’s Gen Y shoppers doubtless make their way through Tati Cycles, a 200sf boutique bike shop in Wicker Park.

Tati’s proprietor, J, describes 2 types of customers who are drawn to custom bikes – one is the 23 year old who went to art school and will spend a lot of money to have a few very good things. The other is the 35 year old architect, who has money to spend, but doesn’t want anyone to know. “He wants really, really nice things, but things that don’t look expensive,” J says. “The average person will look at it, and won’t be able to tell.”

J attributes their modesty partly to Midwestern conservatism. Friends in the fashion industry tell him that conservatism is echoed in the local market for men’s suits. It also suggests nuance to his motive for buying custom, or hand made goods.

The classic explanation for why a consumer will buy something that displays his discernment more than his wealth, is that he is showing off his cultural capital to sophisticated peers. That motive may be real, but it seems to be joined by a real desire for a more personal, less alien relationship with objects themselves. Some consumers want to participate in the production process, if possible, or at least to know everything they can about how the object is made.

J describes a recent encounter with a customer who came to Tati shopping for a jersey. Tati, a tiny shop, maintains a selective collection, so J had just 1 jersey, in black, by Search and State. Search and State is a small company that makes a couple, technically excellent garments from carefully chosen fabrics, in the actual garment district in New York. J and his customer had a 70 minute conversation about the jersey, the customer decided it was exactly what he was looking for, and bought it.

As customer tastes take new dimensions, the categories of custom and mass produced are blurred. Tati Cycles offers cyclocross frames built by Humble Frameworks, at cost, J says, because he wants to help Catano’s business grow to a sustainable scale. But he also sells bikes made to spec by Maxwei, a mass production builder in Taiwan – they are custom, but not built by a single craftsman. 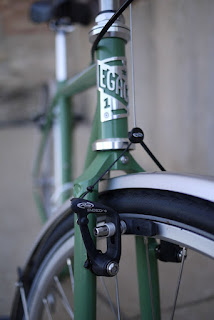 Legacy Frameworks sells manufactured bikes, but they are all hand built by Levi Borreson. He builds the same style in 2 sizes, in small production runs to make them more affordable. Legacy bicycles are carefully engineered for bike commuting, they are slightly less expensive than European commuter bikes, and they only weigh a third as much.

Borreson has been marketing Legacy Frameworks through big organized rides, bike swaps, and pop-up retail events like the Guerilla Truck Show that coincides with NeoCon, partly to avoid retailer mark-ups. 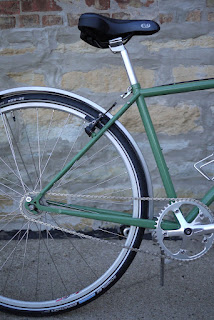 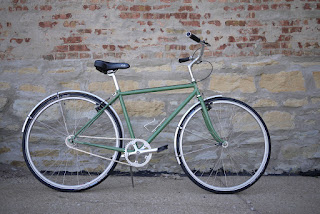 Heritage Bicycles, Chicago’s other small production builder, has taken the opposite tack. Heritage builds very stylish bicycles, and sells them at a Lincoln Park general store, where you can also shop for accessories, and hang out at the store’s coffee shop. In fact, Heritage has developed its own line of waxed canvas panniers.

“I don’t see Heritage Bicycles as being a bike company,” owner Michael Salvatore says. “I see it being a lifestyle brand, and the bicycle is an entry way into that.”

Customer Suzanne Fox describes how Salvatore customized her Heritage bicycle by building it out with racks and panniers – she would have bought the Heritage panniers but they were still under development, “I liked the idea of having an all-Heritage bike.”

Prior to opening Heritage, Salvatore was co-owner of Bowery Bicycles of New York, which sells bikes with a similar combination of local construction and retro-aesthetics. He recalls that when Bowery Bicycles first opened, they expected their customer base to be hipsters and boutique shoppers, but it turned out to be broader – extending to other small business owners and the buy-local crowd. Something similar is happening in Chicago. Heritage opened its doors in January, and Salvatore said he expected to sell at least 10 bikes this year. By mid-August, they had sold 80.

In some ways, Humble and Heritage make very different kinds of bicycles, but Humble Framework’s Catano is enthusiastic about the profile Heritage is bringing to hand built bikes in general. At one point he says “I think they’re the most important thing that is happening right now, in terms of Chicago bike culture.”

“When I started building bikes in Chicago,” Catano recalls “I was really excited that there was a huge population of cyclists, with no one building custom frames here. I thought ‘I’m going to make out like a bandit.’”

He quickly realized the fact it was a wide open market also meant there was little awareness of handmade bicycles as an item someone might want. Heritage makes hand built bicycles accessible, and visible, to a much broader public. Catano hopes that will help other local builders as well. 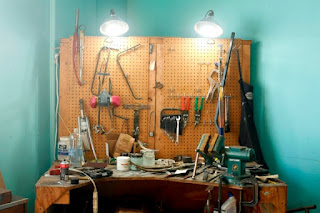