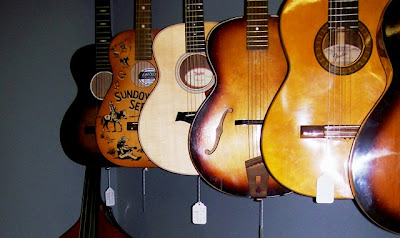 312 Vintage Guitars has only been open for 4 months, and it is already on the map. It’s been featured on DNA Info, mentioned in TimeOut Chicago, and this Tuesday, March 26, it will play host to a live segment for the You and Me This Morning show on WCIU.

Its 35th Street location doesn’t see crowds of pedestrians strolling past, but it is visible to streams of drivers making their way to the Dan Ryan Expressway, and it’s the kind of shop drivers will stop for. Owner Bob Dain, age 26, says he watched one customer drive by, back up, park and walk in off the street. He bought 2 guitars on the spot – a Gibson Les Paul, because he’d had his eye out for one, and a Fender Stratocaster, because he liked the price. He paid over a thousand for each instrument, then went back on his way.

Dain’s career, in fact the span of his life, fits within the emerging market for vintage guitars. The year he was born, Gibson Guitar was a tired brand struggling under foreign ownership and a diminished reputation, production was down to 1 model of electric guitar, and the company was bleeding money. That was 1986, the year Gibson was purchased by a couple young guys with business degrees. Their turn-around plan centered on the company’s heritage, and the reissue of “classic” guitars.

By 1994, the heritage plan was working. Sales had multiplied sevenfold and CEO Henry Juszkiewicz was telling the New York Times he had visions of making Gibson the biggest instrument maker in the United States – a position once traded among Chicago firms.

The Chicago makers lost their lead in the 1960s and 70s, when the center of guitar manufacture moved to Asia. But in the 1980s, Asian buyers holding strong currency also had an appreciation for old American made instruments, and prices were on the rise.

In 1999 Eric Clapton auctioned 100 of his instruments to raise money for a drug and alcohol recovery center, and set record prices. One of his Fender Stratocasters raised $450,000. In 2001, when he held a second auction, retail giant Guitar Center paid $959,000 for his favorite Stratocaster, then made its money back by selling well made copies of it.

Reissues of classic designs, peppered with fabulous prices for celebrity instruments, stoked a market for originals through the 2000s, or at least through that part that was exuberant. Looking back in 2011, Guitar Afficionado observed that a vintage Les Paul Gold Top Gibson was worth $5,500 in 2002; 4 years later, in 2006, the same instrument could fetch $85,000. Then the price crashed to about $30,000, so if you’d bought it in 2002 you’d still be pretty happy, maybe less so if you’d bought it much later than that. Today, Dain says a top quality equivalent from the late 1950s might raise $50-60,000 at auction.

Dain is a musician himself, his band, The Sweeps, plays clubs from Simone’s to the Double Door. He plays vintage instruments, but he is less likely to buy a rarefied specimen in perfect condition than to buy something that is interesting for other reasons, and modify it for his own use.

Dain bought his first vintage guitar at a church estate sale when he was 15, a couple years after Guitar Center bought its Clapton Stratocaster. Vintage Gibson’s were beyond reach for most teenagers by then. Dain bought an Airline brand electric guitar, made by Chicago based Valco Manufacturing Company in the 1950s and 1960s. Dain describes it as having a particular tone, playability, and a “New Agey, Jetson’s type” look. Today, big names like Jack White of the White Stripes and Dan Auerbach of the Black Keys play them. But back then, he says, they were still undervalued.

Dain’s been buying and selling vintage instruments ever since. The crash in prices in the late 2000s made a lot more bargains available. And the market has widened, buyers have come to appreciate more instruments, for more various reasons.

Dain recently sold a Grestch Fury amplifier built by Valco in 1968. Valco was known for its mid-market brands. In 1968 it was going out of business, it assembled the Gretsch Fury from parts it had lying around the warehouse. Today the amp is hard to find, but it’s also appreciated for its clear sound, and the fact it handles effects pedals very well, a quality that wasn’t realized in 1968.

Dain sold the Fury over the internet for $1,800, even though he says they can fetch $2,500 - $3,000, depending on their condition. He says the guy who bought it from him turned around and posted it on a European classifieds list for $5,500. 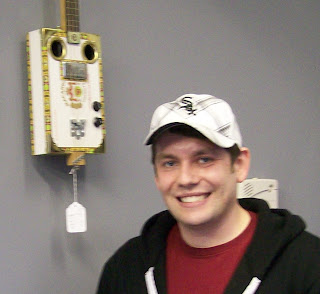 From the 19th Century, Chicago was a dominant force in the mass production of musical instruments of all kinds, and for some of the same reasons it came to dominate other industries: its innovation in modern production techniques, its situation as a logistical center, but also its place as world capital of the mail order catalog. The catalogs all offered large selections of instruments. In fact Sears Roebuck & Co once acquired the Harmony Company, one of the nation’s largest instrument makers, in a bid to corner the ukelele market. The Airline guitar Dain first bought was a brand that Valco made for Montgomery Ward.

Amplified guitars were developed on parallel tracks in Chicago and Los Angeles in the 1920s, partly to make them audible through the din of dance orchestras. In Los Angeles, the National String Instrument and Dobro Manufacturing companies both developed self-ampliphonics, but the Chicago firm Stromberg-Voisinet, which started out in the 1890s, making mandolins, is credited with making the first electric guitar for commercial production in 1928. By the mid-1930s, National and Dobro merged and migrated to Chicago to be near the center of things.

Over the next decades, Chicago’s guitar makers were a case study in agglomeration effects. Companies like Harmony, Kay (heir of Stromberg-Voisinet) and Valco (heir of National Dobro) sold guitars and amplifiers under dozens of brands, they occasionally merged, acquired or succeeded one another, and they consistently made parts, amps or whole instruments to be sold under one another’s brands.

They all prospered on the post war triumph of the guitar. They built acoustics for the folk movement, electric guitars and amps for blues and rock and roll. In the mid 1940s, the Harmony Company, which first set up shop on the present site of the Civic Opera building in 1892, moved its production to 3633 S. Racine, on the edge of Bridgeport’s Central Manufacturing District. It produced up to 350,000 instruments a year in the early 1960s – and it couldn’t produce them fast enough.

Under the British guitar band invasion, demand would not stop growing. But the fade-out of American made guitars was a staggered effect that started while sales were still peaking. One commentator observes that the Harmony Company found itself confronted with a choice between building its production capacity to meet the clamor for instruments, and making the market wait. He says it took the second option, effectively stepping aside to let cheap foreign imports fill the gap.

It was another Chicago businessman who saw the opportunity to fill that gap with inexpensive Asian made guitars. Jack Westheimer established connections with Japanese guitar makers in the 1960s, and sold them through Sears, JC Penny’s and Montgomery Wards. In the early 1973 he created a Korean based manufacturer, originally called Yoo-Ah, then Cor-Tek, it is still one of the largest guitar makers in the world.

Kay and Valco merged, then went out of business together in 1968, when Harmony’s sales were near their height. Then by the early 1970s, Harmony was struggling. Gibson was seeing record sales in the early 70s, but by 1975, Harmony stopped production, auctioned the contents of its warehouse, and licensed its name to Asian imports. In 2009, the Northbrook based Westheimer Corporation bought the name back and has began to reissue a series of “classic” Harmony guitars.

A decade after Harmony wound down, Bridgeport helped launch a new era of instrument manufacture. Ian Schneller, a sculptor trained at the School of the Art Institute, moved into a former lamp factory on Archer Avenue [a building his web-site describes fondly as a “labyrinth of funny little spaces”] in 1986. He began to build musical instruments, first for his own band, and for the bands of friends, under the name “Specimen Products” -- a wink to the anonymity of modern production.

Over time, especially after he’d moved shop to Wicker Park during 1994, he became known for his distinct designs and his skills as a luthier. In 2005, after years of fielding resumes from aspiring guitar builders, he launched the Chicago School of Guitar Making, which has trained over 1,000 students so far. In fact, Bob Dain was one of them. He took a class in guitar repair in 2011 to solidify skills he’d picked up working on instruments on his own.

Dain moved from the suburbs to Bridgeport in 2006, because he’d heard there were cheap rents, and because it would bring him closer to the clubs where his band plays. When he was ready to open his own retail store, Bridgeport was a natural location. There is a density of musicians in the Pilsen- Bridgeport area, he observes, including music studios at all points of the compass (from Hinge Studios in Pilsen and 35th Street Studios to the west, to Alien Audio in Canaryville) but no place to buy guitar strings. Until now.

Dain says that today, about half his sales are still made to Asian buyers over the internet. And it seems only fair that Asian buyers should help finance Bridgeport’s new guitar shop, and the synergies that are already circulating through the shop.

Pete Galanis, a Bridgeport based studio musician has arranged to teach guitar lessons at the shop; Ken Bonner, who also lives in the neighborhood, provides expert services in amplifier repair. Now Bonner is starting up his own business, Bridgeport Amplifier Co, to make boutique, hand wired equipment.

Dain’s display case features other local, small batch brands. Souldier brand guitar straps have appeared on the Grammy’s and episodes of Saturday Night Live – they are hand tooled from a manufacturing facility in the Carroll Street corridor. Daredevil is a brand of special effects pedal made from a musician’s apartment in Logan Square. Dain met the guy who makes them at a gig; he carries Daredevil’s pedals because they’re hand-wired, well finished and “do what they do very well.” Soon, he will also carry Emperor brand speaker cabinets – known for their sturdy, dovetail construction and custom sizes -- they are built from a plant in one of the historic warehouses that line Pershing Road.

Dylan Patterson, who founded Emperor Cabinets once told GearWire that Chicago is a great market for custom equipment, because nearly everyone in Chicago seems to be in some kind of band. 312 Vintage Guitars is already reaping the benefits, and doing its part to multiply the effects.

Posted by Kristin Ostberg at 3:24 PM No comments: