Some Speculations on Real Estate 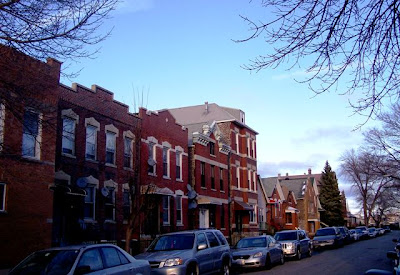 In most Chicago neighborhoods, the real estate market is still in trouble. House prices are still dropping – according to Case-Shiller, a national home price index, Chicago home prices had dipped to 2002 levels by the end of 2010 – and foreclosures are still on the rise. The Woodstock Institute, a local community lending advocate, reports the tide has slowed a bit in the most troubled neighborhoods, but is rising fastest in affluent suburbs and neighborhoods like Lincoln Park.

By comparison, things in Bridgeport look pretty good. Foreclosures are growing here too – there were 128 foreclosure filings in 2010, up from 115 in 2009 – but that’s still a fraction of the filings in other neighborhoods. There were 257 filings in Lincoln Park, for instance, and 501 in Logan Square. Closer to home, Armour Square, the neighborhood just east of Bridgeport, that also includes Chinatown, increased from 8 to 25.

Bridgeport may have other features that make it more like Chinatown than Logan Square – that is, features that made it resistant to the kind of speculative inflation that fed disaster in other neighborhoods, and that might make it more stable during the next round of excess. Time will tell if that’s true when the city’s real estate market revives. But over the next 6 months, I hope to get an advance idea by asking people who know Bridgeport well what’s going on in its real estate market now, and what they expect to happen in the future. (And hopefully they’ll tell me.)

To start with, Chinatown makes for an interesting point of comparison.

Five years ago, when economists were still wondering if there was a home price bubble or not, researchers at Loyola published a paper studying gentrification in Chicago neighborhoods. They mentioned Chinatown as a counter-example, and suggested that the neighborhood’s vibrant retail district, and especially its success at drawing tourist dollars, had lent it ballast against ethnic displacement.

Bridgeport doesn’t have a destination retail district (though it has other distinctive sources of revenue), and retail alone doesn’t make a stable neighborhood. Think of Halsted Street in Greektown, or Argyle Street in Uptown: their restaurants remain vital even as the ethnic populations they first opened to serve disperse.

When I went around asking about it after the Loyola study came out, people told me that Chinatown had something else: a civic network with its own channels for raising capital, and reinvesting it, combined with a real estate market that has remained partly opaque to outsiders.

The civic and investment network emerged partly as an adaptation in a less friendly society. Nineteenth century Chinese moved to Chicago to escape racial violence on the West Coast. They settled at Van Buren and Wells, but were displaced after 1905, when their landlords coordinated rent increases against them. The On Leong Tong hired a non-Asian intermediary to negotiate 50 new leases at Wentworth and Cermak, and a large part of the Chinese community relocated en masse to start fresh.

In the 20 years after China’s Communist Revolution, Chicago’s Chinese population doubled, while the construction of the Dan Ryan and Stevenson Expressways sliced Chinatown’s housing stock in half, leaving weird scraps of real estate in the interstices that have remained relatively unattractive to outside investors. (Think of the triangle between Archer and the Stevenson Expressway, for instance, where new residences have been blooming alongside the Chinese food wholesalers.) 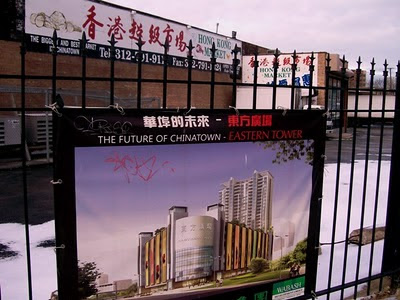 Chicago bankers steered clear of Chinatown up through the 1980s. A high savings rate should have made for an attractive deposit base, but language and cultural barriers, such as the absence of credit or employment histories among recent immigrants, scared most of them off (with the notable exception of Lakeside Bank). In the 1980s and 90s, Chinese investors opened their own banks to fill the credit gap. New Asia Bank and Pacific Global opened in Chinatown proper; International Bank of Chicago and American Metro Bank opened first in Uptown’s North Chinatown, where they are still headquartered, adding branches in South Chinatown later on.

In 1984, a group of businessmen formed the Chinese American Development Corporation, purchased former railway land, and launched a commercial and residential expansion that would double the geographic area of Chinatown. Built in phases over the last 20years, the project was initially financed with a bond issue that raised $1.3 million in $1 shares.

Meanwhile, property sales in and around Chinatown are dominated by Chinese language realtors who don’t advertise through mainstream channels. One effect, as an observer described it 5 years ago, is that outsiders provide commercial revenue, but they’re effectively closed out of the real estate market. “Anyone can do a search on MLS,” he claimed. “Calling up a Chinese language realtor is something else.”

"We never got the boom,” See Wong, President of Wabash Realty told me last year, “and we didn’t get the bust either.”

At the time, he was finishing up a 60 unit condo development at 23rd and Canal. He had presold most of the units before the credit crisis hit. Then, after it hit and buyers who’d pre-purchased units declined to close, he sold them again. “I’m very proud of that,” he told me at the time. He said he discounted prices 5% to incent sales, and was competing for buyers with big South Loop projects that were auctioning off condos for a fraction of the value of their outstanding mortgages.

Across the Chicago region, the popping of the home price bubble was marked by a sustained drop in residential loan activity of all kinds – from home purchase to home improvement to refinancing. According to bank reports made under the Home Mortgage Disclosure Act, residential loans in the Chicago metropolitan area dropped by 46% between 2005 and 2009; home purchase loans dropped by 75%.

In Pilsen there were 74% fewer residential loans in 2009 than in 2005; in McKinley Park there were 67% fewer. In the South Loop, the number of residential loans dropped by only 3%, but that was because a 50% drop in home purchase loans was offset by a 100% increase in refinancings.

In Armour Square, which includes Chinatown at its north end, and the old Italian neighborhood on its south end, residential loans dropped just 33%. In fact, in some Chinatown census tracts there were more loans made in 2008 and 2009 than in 2005 – between 67 – 75% more.

It’s not that the crisis didn’t impact Chinatown at all, but a closed real estate market reinforced by a more risk averse culture (Wong says even modest income buyers regularly come in with down payments as high as 50% because they’re psychologically averse to taking on big loans) helped insulate it.

Something similar may be true in Bridgeport. It is true, for instance, that residential lending trends resembled Chinatown more than the city as a whole. Loan originations dropped 34% between 2005 and 2009 in Bridgeport overall, and they increased in 2 of the neighborhood’s 16 census tracts.

And it may be true for similar reasons. Bridgeport may have its own circuit for reinvesting neighborhood income into real estate, a circuit that is partly opaque to outsiders. The income may derive more from public employment, union pensions and favorable city contracts than from retail revenues at the moment. And at this point, my evidence is more anecdotal then quantitative:

I’ve heard that an unusual number of properties here are exchanged as dollar transfers, rather than sold on the market, for instance. An acquaintance who bought a house in a row of new homes on Parnell fondly recalls how the developer made inquiries about him –not about his credit or employment history so much as about who he was and where he came from – before he’d show him a house.

There are obvious negative aspects to a real estate market closed to outsiders, but there are positive ones to. A lot of them are embodied in a certain kind of Bridgeport landlord, I think of him as a composite of my own landlord and other guys I’ve heard my landlord describe.

He resembles the lord of a small estate more than the manager of a portfolio. He’s accumulated his properties gradually, over decades, or his family has, one 6 flat at a time. He is very hands on. He’s at the property daily, or weekly at the least. If something breaks, he fixes it right away; if something needs tuckpointing, painting, replacing or replumbing, he anticipates it before anything really bad happens. He may collect some rents in cash, he carries a wad of bills with him and pays for things literally from out of his pocket.

When he has a vacant unit, he doesn’t advertise widely for the highest rent he can get, he’s more interested in finding someone who will rent quietly for years, so he advertises in the Bridgeport News, or he doesn’t advertise, he asks around through his chain of acquaintance for a reliable candidate.

Of course, landlords like that aren’t unique to Bridgeport. Maybe all neighborhoods are managed by small estate landlords, until the point speculative interest catches up to them and they aren’t anymore. Bridgeport’s famous insularity seems to have helped him hold on longer here. So has its housing stock.

Compared to the city as a whole, Bridgeport has a larger portion of apartments in small buildings, and a smaller portion in large ones. As of the 2000 census (2010 figures aren’t available yet) 72% of Bridgeport’s housing stock was in 2-9 unit buildings, compared to 43% for the city as a whole; only 2% of it was in buildings with more than 10 units, compared to 30% for the city overall. There are no big apartment blocks ripe for condo conversion in Bridgeport -- when change arrives, it will have to move-in piecemeal, one 6-flat at a time.

On the other hand, housing stock alone doesn’t account for Bridgeport’s stability. McKinley Park, Brighton Park and Pilsen all share roughly similar distributions of small and large apartment buildings, and single family homes. During the crash, loan originations dropped off between 67-83% in those neighborhoods. Foreclosure filings in Pilsen have been similar to those in Bridgeport, but Brighton Park had 336filings in 2010; McKinley Park had 92, about 30% less than Bridgeport, but in a neighborhood with a third the total housing units. 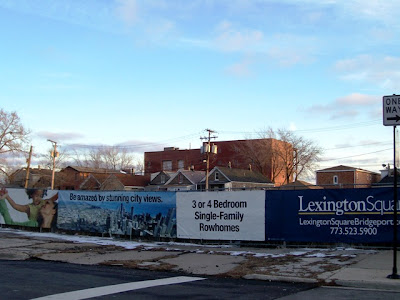 At the end of the housing boom, condo developers began to pick up former warehouses on the edge of Bridgeport’s PMD, a protected manufacturing district. When it resumes, swaths of former industrial land to the east of the PMD, in the blocks around Donovan Park, will be cleared and ready for new construction. Bridgeport will benefit from that kind of investment too.

But it will be interesting to see what the old landlords will do then. Will they sell off their holdings, cash in for some less labor intensive investment? If they do, we’ll all miss the benefits of their tenure. They provide safe, affordable housing that makes Bridgeport an entry point for immigrants, and also for start-up galleries and bike-frame builders -- people whose presence provides a non-monetary stimulus that’s greater than their rents.

Homeowners and other property owners benefit from the stabilizing influence of the landlord with modest ambitions too. That influence seems to have translated into fewer foreclosures, more loans, prices that didn’t totally deflate. We didn’t get the boom some other neighborhoods saw a few years ago, but we didn’t get the bust either.
Posted by Kristin Ostberg at 7:25 AM 7 comments: