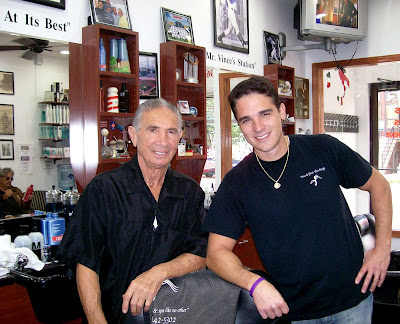 The first time I got highlights in my hair I came out a little too Bridgeport blond. My landlord, who has turned out to be a source of sound advice on a surprising range of topics, suggested I try Vince and Gino’s Hair Design at 28th and Wallace instead.

I’d seen the shop before – I thought it was a barber shop. It is. But they do women’s hair too. Not only did they fix my hair, but from my perch in the ladies’ salon I could watch them barber the men, which is worth a visit in itself.

They’d finish a haircut that was less than an inch long, then apply product and blow it dry – the whole operation accompanied by lively conversation. “A lot of it’s the pampering,” Gino says of the barber’s service, but it’s also the finishing. “Barbering is all about the details.”

They use clippers for very short hair (clippers aren’t less traditional than a comb and scissors - most men probably know this, but I didn’t – there were manual clippers before there were electric ones, and their relative merits are a function of how short the cut will be).

But clippers are often the first step at Vince and Gino’s – they’ll go back over the cut with scissors to make the hair lie right; or they’ll use the clippers to shave the neck and shape around the ears, and then lather is up and perfect it with a straight razor.

Gino’s father Vince Ballone learned the barber’s trade in Italy, where training entailed a 4 year apprenticeship. You’d start out sweeping the floors and move up to applying lather before they’d let you hold a razor – a respectful pace for an art that entails applying a sharp blade across someone’s throat. Vince came to Chicago and opened the shop at 2845 South Wallace in 1960.

In the US, Gino’s path was different. He went to beautician’s school, and got recruited into an assistant-ship at an Oak Street salon. They didn’t call him an assistant, they were charging hundreds of dollars when he colored people’s hair, so they called him a color specialist and told the clients he was from Milan.

Part of his education was to stand and observe as the master stylists performed. One afternoon, a client sat down and told her stylist “You know, I think you left this side a just little bit longer than the other last time you cut my hair...”

The stylist bit her head off. “I am an artist! You’re just a canvas!” He stormed off, leaving Gino, stunned, with the client. The client started to cry in the chair. Eventually the stylist cooled off, came back and apologized. The client apologized too.

That will never happen to you at Vince and Gino’s. Most of their clients have been coming back to them for years, some of them for 3 generations. For much of that time, Vince Ballone’s barber shop was a 2 chair operation. Gino left Oak Street and set up a 3rd chair for doing women’s hair in 1992.

John Caliscibetta joined the business eight years ago. He knew Vince from the Italian American Club. He’d been cutting hair downtown in the Loop since the 1960s. Businessmen got their hair trimmed every week, and they had people in the chair for a shave every day. 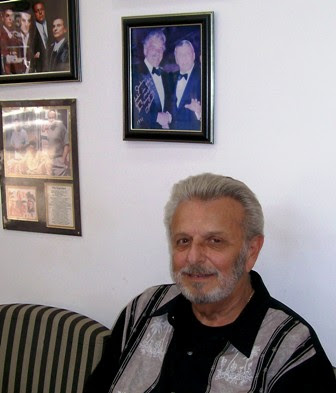 John recalls during the Civil Rights era, they’d get calls from African American men asking if they cut black hair. He’d tell them he didn’t have much experience with black hair, but he’d try. Often, they’d decide to go elsewhere, figuring he wouldn’t do the best job. “But they wanted to know if we’d turn them away.”

Today, barbers and fade shops may be more prevalent in African American neighborhoods – there are still a couple barber colleges in Chicago today. But if you google “traditional barber” you get a list of shops in distant cities with names like “Good Fellas” and “Quintessential Gentleman” – names that suggest the old-world barbershop has come near enough to extinction that it could be subject to a retro-cool revival.

But if the old-world art is going to persist uninterrupted, it makes sense that it’s doing that here. Gino says there are 2 other traditional barbershops in the vicinity – Joe’s on 26th Street and another shop on Taylor – though Vince and Gino’s is the only one that still does a hot facial shave.

Shaves aren’t as common anymore, but they’re still in demand. Vince and John used to get clients who didn’t shave themselves, they’d only get shaved at the barber shop. They would have their own razor in a mug at the shop.

A straight razor shave lasted twice as long as a DIY version, mainly because the quality of disposable razors was very bad. Gino says disposable razors improved dramatically in the last 20 years. In fact the straight razors they use at the shop are disposable, just to guarantee against any potential for spread of infection. Though a barber can still shave you closer with a straight blade. And people still appreciate the pampering.

My informal poll of male acquaintances showed significant interest in the procedure, though most respondents had never had it done. One had heard a straight blade shave would chafe his face.

Gino says some people are sensitive to the straight razor, especially if they haven’t been shaved with one before. But the barber can see that as he’s shaving, and he’ll avoid making a second pass against the grain.

The details do a lot to smooth the operation. Hot towels soften the skin; a pre-shave lotion raises the beard; the lather is applied warm. Some clients opt for a mud mask to clean their pores after the shave itself. 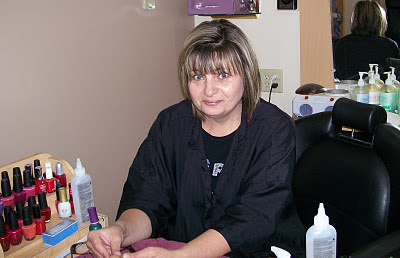 Five years ago, Vince and Gino expanded the shop, adding new staff and salon services. Victoria Marina does manicures, pedicures, facials and massage. She says about half the manicures she does are for women, the other half are for men. Christina Lebato joined the shop out of beautician’s school about 2 years ago – she does my hair and I come out of there looking like a much cuter version of my former self. 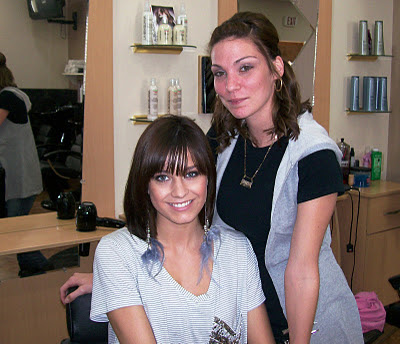 Paige is the newest employee, she’s trained in hair, but also in make-up. Most of her clients who want make-up done are primping for homecomings, weddings or other formal events, but she’s also been trained in theatrical make-up, which you might keep in mind for other occasions. If you’re attending an Edward Gorey Halloween party for instance. [Which I was, at the time I wrote this. Now I realize it might suggest it's her preferred style (not so). Also, the photo of the pretty ladies shows Paige, at left, and Christina. I do come out looking cuter, but not that cute.]

Now that elaborate whiskers have made a comeback, there should be a new market for traditional barber services. Another respondent in my acquaintance poll wears his hair down over his brow, and has an old world mustache. He goes to a salon to have his hair cut, because when he’s gone to a barber shop, his hair doesn’t lie right.

But the woman who does his hair won’t touch his face. She sees an imaginary line that marks the end of her expertise, somewhere in the middle of his sideburns. If that sounds familiar, you might take my landlord’s advice and go to Vince and Gino’s. They’ll shape your mustache, and make sure your hair lies just the way you want it, too. 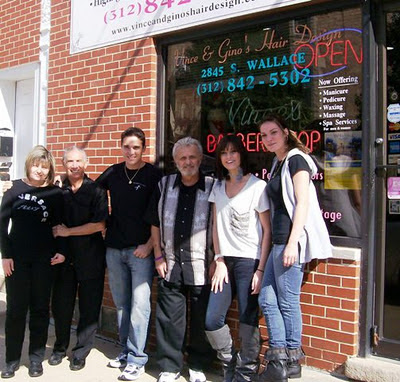 Posted by Kristin Ostberg at 6:28 AM No comments: