A New Generation of Live Work Space on Halsted 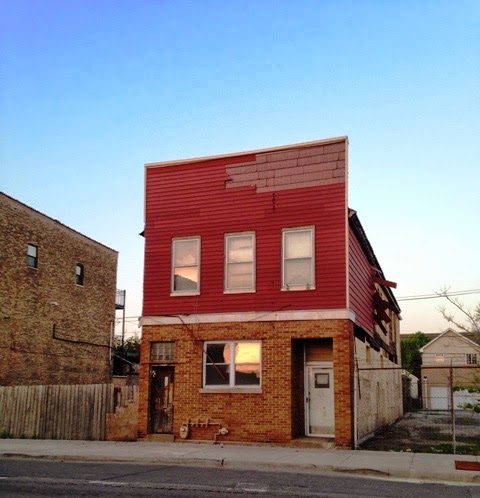 On the outside, this building looks like a lot of the mystery buildings on Halsted Street, like someone has forgotten they own it, or like they’ve inherited it from their grandparents and they aren’t sure if it’s worth anything yet.

But if Halsted’s other mystery buildings are, in fact, anything like this one, that’s good news for the near term fortunes of the street, because this one has been humming with plans for several years.  Visible progress was slowed by structural problems and hurdles in the Chicago codes, but now they’re cleared, and behind the frontier-town façade the building’s insides are being rapidly rebuilt from the basement floor to the rafters.

When renovations are finished in July, there will be 2 second floor apartments, a maker of traditional Italian sausage in the basement, and a giant live work space on the first floor.

Kevin Sheehan and Bobby Lyons were both born and raised in Bridgeport. So were their parents -- Bobby’s family were cops, Kevin’s were tavern keepers. They have been close friends since grade school, they lived their wild youths together, though they’ve both settled down a lot since then.

A few years ago they started tossing around the idea of buying a building together.  They considered buying a bar out in Mount Greenwood, which seemed like a good source of easy profits, but the potential for easy profit gave way to other considerations, and if this project has one defining characteristic, it is something more like a long term view.

The building they finally bought, in 2011, was the first bar Kevin’s family owned in Bridgeport.  His grandfather’s brother opened it before Prohibition.  It’s across the street from Schaller’s, which holds the oldest active liquor license issued in Chicago, and a few doors south of the 11th ward office.

Kevin’s father ran his own tavern on Union and 38th Street, kitty corner to where the Shinnick’s tavern still operates today. Kevin’s cousin Jack Sheehan, who married a Schaller, still operates his tavern near 35th Street on Halsted – next to the former site of Bridgeport Tattoo, whose owner once talked admiringly about wanting to tie his business in to a traditional neighborhood like Bridgeport, though he’d lived a more itinerate life himself and he’s since shuttered the shop.

One of Kevin’s uncles ran the bar at 3707 S Halsted when Kevin was a kid – he’d lived in the apartment over the bar his entire life.  After he died, the family sold it to Richard Mossman, a bricklayer they knew, who rezoned the parcel to accommodate plans for a lofty 4 story condominium development he hadn’t got around to building before the market crashed in 2006.

By 2011 Mossman had a For Sale sign in the window, and Kevin and Bobby called him up to inquire.  They knew if they bought it they would have to put time and money into it -- the building had settled and shifted over the years, the whole frame tilted to the side.  But it’s in the same corner of Bridgeport where they have anchored their lives, and it has sentimental significance. Kevin’s says his father, who has passed away, had thought about buying it, and he would have been glad to know the old building was back in the family.

Once they owned it, they went back and forth a couple times about how to proceed.  At first they got permits to renovate it, they thought they could take down a couple exterior walls and salvage the others.  For awhile it looked like they might have to tear the whole thing down and start from the ground as a new construction project.  City codes would have required them to move the structure back 15 feet from the sidewalk, and from its original foundation, which they were willing to do, but they needed a new set of permits, and the permit process dragged on through the fall of 2013.

By December they decided to go ahead with the renovation, which they already had permits for.  They tore the insides out, down to the exterior walls; their contractor looped chains around the top beam in the north wall of the frame, and workers on the ground in the lot just south of the building pulled the whole thing straight with come-alongs.  They nailed in some reinforcing carpentry and let it stand for a month to make sure it stayed straight, then they built the interior framing that will help hold it in place over time.

Meanwhile, one of the most brutal winters in memory blasted the structure with freezes and thaws and eventually caused the foundation, exposed when they took out the floors, to crack. At this point, other investors might have turned, snarling, on each other and sued their contractor; Bobby and Kevin made parallels to the metaphorical significance of building a life on a strong foundation, and their contractor, whom they’ve known for years, proposed to split the cost of the repair.

When it’s all finished, the building will have a pretty new masonry façade facing Halsted Street.  Bobby will move out into one of the apartment on the second floor, and Mike Botica, another friend from the neighborhood, whom they’ve known for years, will rent the basement to make sopressata, a dry cured Italian sausage.

Mike makes sopressata using old family recipes he learned from his wife’s Grandma Theresa.  He says they used to hang their sausage in a spare bedroom, leaving the windows open so it could cure in the cold.  He first started helping out when he and his wife were still dating.  When Grandma Theresa saw he had an interest, she sat him down and taught him her recipe, and handed over her grinder and her press, which he still uses – they’re each over 100 years old.

Right now, Mike makes his sopressata for friends and family as a hobby, but it’s “a hobby on steroids” --- last year he made 1,200 pounds of it in a 3 day operation that brought up to 30 people to his house at a time.  Setting up all the tables and equipment is a project in itself: moving it all out from his garage into the basement at South Halsted will allow him to make the set up permanent, and also to install a walk in cooler and de-humidifier.

Eventually he would like to get all his licensing lined up and open a business – he says he’d try selling it mail order first, and if that goes well, he’d like to open a deli on the first floor of Bobby and Kevin’s building.  It would require changing the zoning back to commercial, but he’s already discussed it with Alderman Balcer, and the Alderman was enthusiastic about the idea.  They both remember a time when South Halsted had more storefronts on it – including Granata’s, next door to the Ramova Theater, which Mike describes as something like Conte di Savoia on Taylor Street, not as large, but very successful.

All that would be several years away, come July, the 1st floor space will be ready for other uses.  Mike says Kevin and Bobby have chosen an ideal location – with the new homes being built out from Donovan Park on the west, and some of the most stable blocks in Bridgeport to the east.  The Halsted renaissance might seem slower to advance than its residential one, individual investments might take time to mature, but the foundations are good. 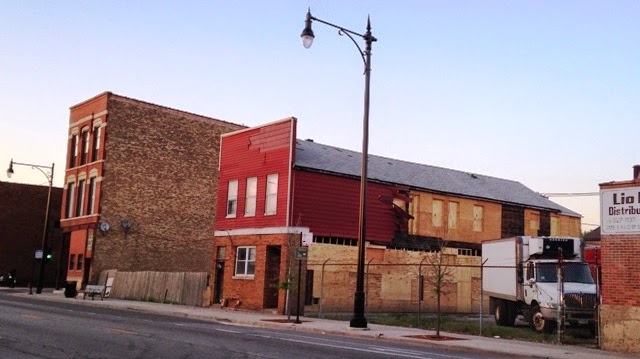 Posted by Kristin Ostberg at 8:35 AM 8 comments: