Arrival of the Bridgeport Pasty 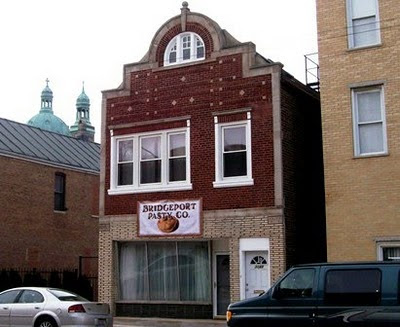 It’s not clear if the Bridgeport laborers who dug the I & M Canal ate pasties to sustain their strength, but if they were digging it again today, they probably would. Carrie Clark and Jay Sebastian aim to have the Bridgeport Pasty Company open for the business at 3142 S. Morgan by spring.

“Make sure you say it’s pronounced ‘pass-tee’,” Carrie urges. Not to be confused with ‘paste-ee,’ a sparkly ornament worn by strippers, or ‘patz-ee,’ a gullible dupe. A pasty is a pastry pocket, filled with potato, onion and any kind of savory meat, or fish.

“It’s not a light food,” Carrie admits. It’s got a substantial history. Knights in Arthurian legends fortified themselves with pasties. So did Cornish miners, who brought them to the copper mines in Michigan’s Upper Peninsula, where the portable meal proved to have broad appeal. It stays hot in the lunch pail for hours, and it can be held by its pastry corner and eaten without a fork.

Jay and Carrie ate their first pasty from a street vendor on a Christmas trip to England 2 years ago. They couldn’t believe no one was selling them at home.

Jay manages a legal research team at a big firm downtown, and Carrie coordinates the international vetting process for proposals to use the Center for Nanoscale Materials at Argonne Labs. They’ve been looking to open their own business on the side for some time.

They briefly considered opening a produce market to replace the Egg Store, but the space got leased to a physical therapy center, and now Cermak Produce is opening across the street. Pasties, as street food, were still on their minds.

Street food, sold from trucks, is a hot concept in other cities. It’s evolved from the sandwich trucks that pull up alongside construction sites, to a vehicle for cool chefs, who post their itinerary on Twitter, so fans can meet them along the route.

Jay has fond memories of a childhood enterprise selling lemonade and other treats from a simple food truck built from a wagon. He envisioned a human powered vehicle could be ideal for bringing pasties to city streets today. He bought a Workman tricycle-based food truck, and was working out plans to rig it with a hand-washing sink to meet city licensing requirements.

But when he got to the City Hall, the self-powered truck didn’t fly. “It has to be a (automotive) truck,” he was told. He protested bicycles are vehicles with rights of automobiles under the law, but the people behind the desk weren’t convinced.

He’s still got the Workman trike-truck in the garage, in the event they come around, as the city’s thinking on new businesses evolves. It is in the process of evolving on the food truck question right now.

Currently, food trucks in Chicago are limited to selling pre-packaged foods. Chicago chefs like Matt Maroni of Gaztro Wagon, and Philip Foss of Meatyballs Mobile, are pushing the new truck-food concept with dishes they prepare at their restaurant kitchens. And they’ve found an advocate in 32nd Ward Alderman Waguespack, who is backing an ordinance that would allow food trucks, properly outfitted, to sell foods prepared on the truck, provided they stick to a regular route, so food inspectors can catch up for random inspections.

The restaurant establishment is loudly opposed to changing the rules. Restaurateurs complain it’s unfair competition if some guy in a truck can pull up outside their brick and mortar store, which cost them millions to build, and benefit from the same customer demographic. The Illinois Restaurant Association says food trucks should be limited to food deserts.

Some of the complaints – that the trucks don’t have bathrooms so they’ll add strain to other people’s facilities, that they will exhaust city inspectors, who are already in limited supply, that they have an illicit, “gypsy-like” feel – sound weird. The trucks aren’t designed to compete with a restaurant’s sit down business, and they are, by design, on the move.

At any rate, while the proposed ordinance navigates the gauntlet, the pasty is the original pre-packaged food. Jay and Carrie have been lining up their incorporation papers, their licenses and their state health certifications. They’ve also been looking for ways to link up with other local businesses.

The kitchen at at a local pizza restaurant sits empty until afternoon, and it turns out equipment for preparing pizzas also works great for pasties. The Bridgeport Pasty Company could source meat from Allen Brothers on Halsted Street, and produce from Goodness Greenness, the organic wholesaler in Englewood. “The more local, the better,” Carrie says.

Traditional pasties are better known for being filling than for being flavorful, but Carrie has been working on that. She’s developed various wine, herb and curry enhancements; Jay’s been perfecting a flaky, but chewy crust. On New Year’s Day, they hosted a party that turned out to be an advance sampling of some of their best recipes. 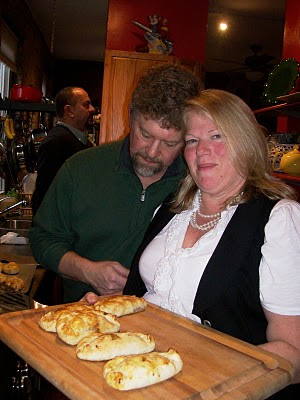 The tasters were diverse in their expertise: they included the personal chef for the Governor of Virginia (who is considering setting up shop in Bridgeport when he finishes his current post), as well as an eminent expert in holography, the glass blower for Argonne Labs (who creates all their custom glass instruments by hand), a mixed crowd of cyclists, musicians, sound and video engineers, and at least one Bridgeport blogger.

We all sampled pasties under development for the Bridgeport Pasty Company. And now, we can all attest that they are filling, wholesome, and very, very good. Personally, I predict the pasty will emerge as a Bridgeport specialty, like hot dipped Italian beef is now, except with more vegetables, and more variety, and easier to eat.
Posted by Kristin Ostberg at 11:27 AM

Email ThisBlogThis!Share to TwitterShare to FacebookShare to Pinterest
Labels: Food