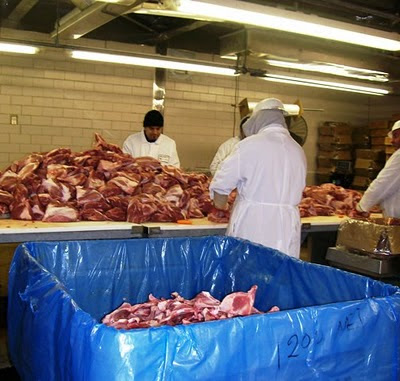 The meat industry is often described in terms of factory farms and big business processing on the one hand, or the sprouting of small-scale, free-range, craft-butchered specialists on the other. Between them, there’s an unobtrusive, but vital middle ground, which happens to be well represented around 38th and Halsted Street.

Henry Kaminski set up shop near there in 1960. His son Ron and his granddaughter Dori still run the business from 3762 South Halsted, across the street from their original building, today. They sell pork butts and boners. The butt is part of the pig’s shoulder; a boner is both a butcher who debones it, and the meat that has been deboned.

Between the 2 buildings, Kaminski receives 3-4 truckloads of pork each day, about 6-8 tons of meat. After trimming and deboning it, they sell it to sausage makers across the country. They sell some cuts in Central and South America, but only through a broker, because export adds regulatory layers they don’t want to take on themselves.

But Ron says 50% of their business is in Chicago. Many of their customers are mid-sized family owned companies, much like themselves: 3rd and 4th generation sausage makers like The Original Notoli & Son, ATK Foods, the makers of Leon’s Sausage, and Crawford Sausage Company on the west side.

Crawford, for instance, opened their Lawndale plant in 1925. Third and 4th generations of the original founders make German and Polish sausage under the Daisy Brand at the same location today. “Our family has known them forever,” Dori says.

Crawford sausage is available through independent grocers like Angelo Caputo’s and Tony’s Finer Foods. In fact you can sample several varieties of Daisy Brand sausages, which may contain pork deboned and trimmed by Kaminski, from the deli counter at Halsted Foods. 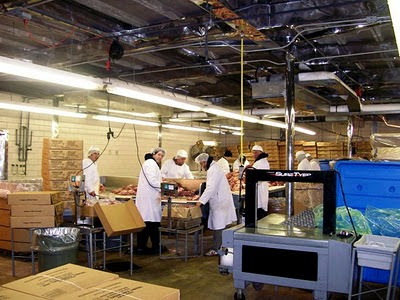 Henry Kaminski started out as a peddler in 1940. He bought meat from the packing houses around the Union Stockyards, and sold it to butchers and grocers from a truck. They sometimes delivered to 3 different shops on a single block. But as the corner grocer gave way to the supermarkets, who brought their own supply chains, Kaminski went into the boning business.

In 1960, Ron recalls, meat made the whole neighborhood hum. At its peak, the Union Stockyards and its related businesses employed some 30,000 people. There was a street car that brought them down Halsted Street. The workers patronized scores of taverns – there was a block on Ashland that had more than 12 – and the Bridgeport Restaurant fed the graveyard shift all night long.

At first, the stockyards were primarily a livestock exchange, and the packers, processors and wholesalers set up on the peripheries. Everyone remembers Swift and Armour, but Ron remembers scores of independents. Bridgeport had its share. There were probably half a dozen shops that trimmed pork butts, but there were also a half dozen places where you could buy pork butts to trim, if one of your suppliers was out.

Eventually, the packing business would move westward, “they moved to the livestock,” Ron says, rather than the other way around. He says the old multi-story buildings, where live animals were loaded up top and disassembled as they made their way down, grew obsolete, and the labor unions were expensive. Labor wasn’t organized in the western states, where the big packers built state of the art plants from the ground.

But the move was gradual. The last beef packer, Lincoln Meats, closed in the early 1990s. Kaminski bought pork from American Meat Packing Corporation, who slaughtered 3,000 to 3,400 hogs a day at their Pershing Road plant, until they closed it for good in 2001. In their final year, AMPAC was plagued by rats that bred in the abandoned lots of the old stockyards, and by penalties from the USDA.

A rash of Bridgeport’s meat businesses have closed just in the last 10 years. For some, the approach of residential neighbors made their lives difficult. Fontanini’s new neighbors complained about the smell of cooking meat. Dori says they relocated to McCook County rather than install a new round of expensive equipment to mitigate the smell.

But she says some companies just made “bad decisions.” A new generation came into the family business, “they thought bigger was better,” then they struggled to support new debt. Dori jokes with her father that he’s lucky she’s not greedy. Kaminski continues to provide a good living for the Kaminski family and for their 35 union employees.


Today, there are 23 companies listed in the meat business in the 60609 area code. They include OSI, a giant that supplies McDonalds, and the Chicago Meat Authority, which just set up shop in Back of the Yards 20 years ago. Collectively they employ almost 1,800 workers, according to the directory Reference USA.

There are 6 meat companies in Bridgeport alone; they employ about 450. Allen Brothers was founded in 1893, and is owned by the 4th generation of Hatoffs, they sell premium steaks to white table cloth restaurants. Dori describes Guarino as a “jobber,” a wholesaler who trucks meat without opening the box. Barkaat Foods slaughters lamb and veal in Chiappetti’s old plant, and Chiappetti’s still shares the facility. Lincoln Provision exports frozen and prepared foods overseas. Ed Miniat began peddling meat from a horse drawn wagon in 1896. Today, the company has a cooked meat facility in South Holland, but they render cooking oil from their 38th Street Plant.

The meat world has changed around them, especially on the regulatory front. The Kaminski company , which doesn’t cook, and whose processing is relatively simple, has had to make fewer physical improvements than some of its peers. They’ve had to add stainless steel surfaces, and an air curtain at the doorway to keep the flies out.

They’ve been more alarmed by the escalation of paperwork. Each piece of meat they touch must be documented on its path from the farm to the fork. And this January, President Obama signed the Food Safety Modernization Act, which steps up the requirements for proactive food safety plans. Food processors’ HACCP, or Hazard Analysis and Critical Control Point, plans must identify every point at which contamination or mishap might occur, and create protocols for addressing them. Dori and Ron believe new layers of bureaucracy are driving up the cost of food over the long run.

In fact, prices are the second arena of dramatic change in the meat industry today. Meat prices hit new highs last year, and pork prices in particular spiked last summer. Squeezed between the recession and record prices for corn, farmers have allowed their herds shrink. Beef and pork dealers fear that high prices only aggravate a 30 year consumer trend toward cheaper poultry. And USDA economists anticipate food prices will continue to rise in 2011, and for the foreseeable future, so long as diets in the developing world continue to improve, driving up world demand for meat.

Dori thinks rising food prices will be hard on the market for organic foods in the long term, but in the immediate term she says they’re a threat to Kaminski’s closest customer base. “We know they can’t pass those prices on at the retail end,” she says, because the customers in the store will balk. Kaminski has a solid niche as specialists. They sell wholesale but they’ll bone and trim to spec, and Dori says the big corporate companies won’t. But the industry is changing, and she can hear it on the phone.

“The meat business is very casual,” says Dori, who is quick to laugh. "You make a call, order some meat and then you spend half an hour talking about last night’s 2 and ½ Men episode.” More and more though, she finds herself talking to kids just out of business school, intent on sounding professional over the phone. They are the voice of a different kind of meat business from the one that’s sustained Kaminski and its customers for the last 50 years. 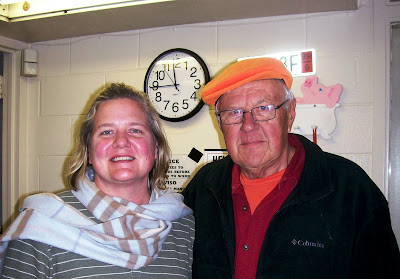 Posted by Kristin Ostberg at 7:51 AM

Email ThisBlogThis!Share to TwitterShare to FacebookShare to Pinterest
Labels: Meat