Notes from the Sidewalk 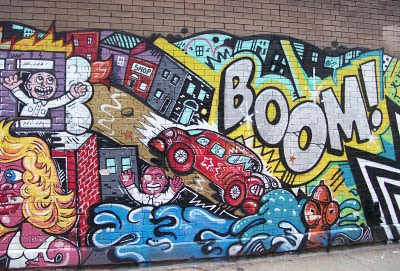 Early morning walking up Morgan Street, just before 7 am -- there’s a family out in the street making a scene. A young woman, so hysterical she seems drunk, or otherwise out of her mind, is screaming at a man -- she says she loves him, she says he beat her, she’s got a bloody nose.

But his nose is bloodier than hers is. He doesn’t say much, he kind of staggers in the background, he looks baffled and helpless.

His other woman is a big blond. She’s got her kids out with her in the street. She’s screaming “You’re fucking stupid!” And the younger woman screams “I am NOT STUPID!”

The big blond screams “He didn’t beat you, you beat him. Look at how you beat him, in front of my fucking kids, you crazy bitch!” As I get closer, she grabs the younger woman by the hair and tries to hit her head against a parked car.

The blond is telling the other woman to leave, but the other woman is wound up and wants to keep going. She retreats a few yards down the block, out of reach of the blond, who’s probably stronger than she is fast. And she screams and sobs from there “I love him!” 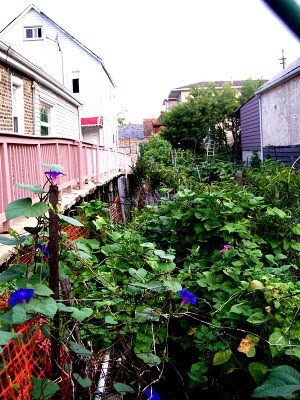 I find this garden on 29th Street, behind the park in Stearns Quarry. I love these tiny trellised gardens you see packed into people’s sunken front yards, or in the narrow space alongside a house – constrained on the ground, they grow upwards.

This little house has gardens on all sides. While I am admiring them from the alley there is a rustling in the foliage, and a big, gentle dog comes out, and then a frail old man in khaki slacks cinched around his waist with a belt.

I compliment him on his garden, and he seems to understand me, but he doesn’t speak English, or if he does, his accent is so heavy I can’t understand. He looks like he might be Italian. Finally, he fumbles among his trellises and hands me a green squash through a gap in the fence. I thank him, he nods, and I leave him there.

I’m hoping he’s not alone in that house behind the gardens, having outlived his friends in a neighborhood where he never learned the language, when I arrive in the park at Stearns Quarry, and I'm surprised to find the paths are crowded with elderly Chinese.

They are out to take exercise before the heat sets in. Some walk briskly, they swing their bent arms from the shoulder, or they raise their arms and do clapping exercises. Some practice walking backwards, up the gently sloping paths, or they just stroll reflectively in the company of their friends. 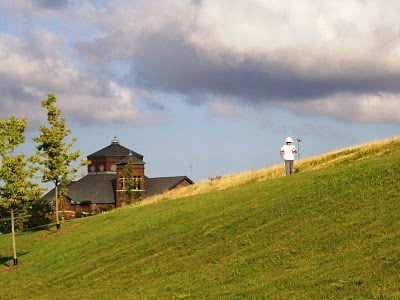 Posted by Kristin Ostberg at 8:08 AM

Email ThisBlogThis!Share to TwitterShare to FacebookShare to Pinterest
Labels: Notes