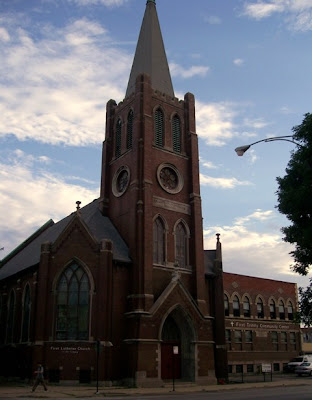 God’s Closet has been closed since June, and the process of reopening it occasionally seems like an object lesson in how hard it can be to cooperate with other people. Though Rich Albrecht is confident it is ultimately proof of better things, and he’s probably right more often than people admit in the planning meetings.

I make these observations as an interested party. God’s Closet is a ministry launched by Bridgeport’s First Trinity Lutheran church 11 years ago to provide clothing to those in need. I started attending First Trinity myself some months ago. I’m not sure why -- I hadn’t been a church-going believer for years before I walked in there, and I’m not sure I qualify now. But the place exerts a weird appeal.

The church at 31st and Lowe is physically imposing, but inside on any given Sunday, 20 to 30 odd attendees struggle with the hymns. It works out okay, because our feeble voices are greatly augmented by a rollicking 6 piece band. The vocalist, Anais, occasionally scolds us to sing along with her on the hymns. (We are singing! You can’t hear us, but we are!)

I’m not sure any of the band members first showed up because they wanted to go to church. A lot of them first came to play at The Orphanage, a performance venue hosted in the church’s old school building. Some of them live in apartments on the church property. But on Sunday mornings they fill that sanctuary, and the sound lifts your heart.

While it's numerically unprepossessing, the congregation draws people from all walks of life, including other denominations, like Catholics and Pentacostals. Pastor Gaulke, or Pastor Tom as he is more often called, is young, this is his first congregation out of seminary, and he seems to like rapport during the service – people call out to him, and he’ll incorporate what they say as he goes along.

Ever since St. Bridget’s was closed in 1990, First Trinity has been the oldest Christian congregation in Bridgeport. Its endurance has been something of a marvel. Urban congregations declined everywhere in the 1970s, but First Trinity endured additional tribulations, when a charismatic pastor turned out to be abusing the youth.

Some members fell away in the scandal, others migrated toward the suburbs over the decades and were never replaced. The congregation had been without their own pastor for 12 years, before they hired Pastor Tom last year. He says when he first arrived, others in the synod told him they had thought First Trinity in Bridgeport would probably just die away.

But it didn’t. And more admirable than the congregation’s persistence is the fact it didn’t turn inward, or retrench. Immediately after the scandal, church members decided to convert from the conservative Missouri Synod to embrace the progressive ECLA. And in the years since then, as their numbers, and budget, were shrinking, they turned outward toward the changing neighborhood around them.

Partly, they were motivated to rent their real estate. But having tenants has brought other good things. Now they host a long running chapter of Alcoholics Anonymous, and two other small churches, who use First Trinity’s chapel and the kitchen for services on Sunday afternoons. They began leasing out parts of the school building as apartments, and new tenants launched the Orphanage music venue, which seeded the creation of the church band, whose members have become leaders in Bible Study and other church activities. God’s Closet, the clothes ministry, occupies another classroom in the former school.

Hiring Pastor Tom last year, after 12 years without one, was a significant step forward from survival mode. Pastor Tom says when he started, First Trinity drew a significant stream of young people, but they were more transient. They were drawn to the church’s accepting environment as they prepared for the next stage of their lives. In the year he’s been there every Sunday, the base of people who come more consistently has grown.

Rich Albrecht is First Trinity’s Associate Pastor, he’s served First Trinity for 30 years. He coordinated the supply pastors who preached every Sunday during the vacancy. Now that Pastor Tom has arrived, he mans the office – he is the one who answers the office phone when people call for assistance, which is pretty much every day. 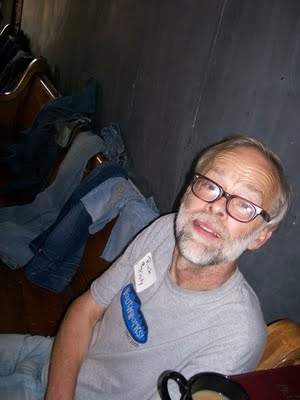 Rich takes the church’s mission to serve its neighbors very personally. He picks up medication for the housebound, gives rides to the elderly, or helps find apartments for people forced to move. He is also willing to let interruptions dominate his day to a degree most people would not tolerate.

If a young man he’s watched grow-up under unsteady influences calls Rich to ask for a ride to pick up his first paycheck, Rich sees it as an opportunity to nudge him to open a bank account on the way home, an opportunity easily lost if he doesn’t respond right now.

Rich is adamant that God’s Closet is one of First Trinity’s most important ministries, and he is impatient to see it open again. For a decade, it has provided clothing to people who most need it – after an apartment fire for instance, or because the kids outgrow their clothes every year.

But managing it is a struggle against chaos. The volume of donations is overwhelming. Some of them are clean, necessary items like warm coats, school uniforms, and work attire – even prom dresses. But they are mixed with an equal volume of dirty t-shirts, polyester slacks and clothes of deceased relatives that no one wants, but that the heirs can’t bring themselves to throw away.


Everyone agreed the accumulation of giant bags and bins of unsorted stuff made it hard to operate God’s Closet in a dignified way. Though once it had been shut down for a thorough reorganization, it became clear no one really agrees on the most efficient way to do it. In fact we don’t have consensus that efficiency is an important goal. 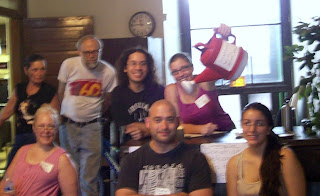 Our first efforts to sort were overwhelmed by continuing donations. So we advertised a big clothes give away to clear out the bulk of unsorted stuff. The response was inspiring – about 150 people came to clothe kids that are growing, find work clothes for new jobs, restock closets ruined by recent flooding. I think we’ve all emerged re-committed to reopening God’s Closet for good this fall. If we don’t do it efficiently, we’ll do it the way First Trinity does everything else, by persistence and good faith.
Posted by Kristin Ostberg at 9:01 AM

Email ThisBlogThis!Share to TwitterShare to FacebookShare to Pinterest
Labels: Church