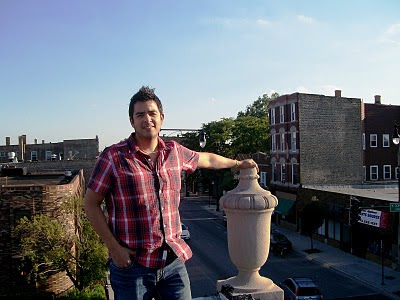 Omar Solis stands on the roof above Nana restaurant at 33rd and Halsted and looks out over blocks of underdeveloped real estate. Some of the Halsted storefronts are vacant, but all of the rooftops are unused. He’s envisioning a network of small gardens – on rooftops and squeezed into side lots -- all growing herbs and produce for his organic restaurant downstairs, and maybe for other restaurants as they arrive.

The Solis family has been in the restaurant business in Bridgeport for 50 years and 3 generations, since Omar’s grandfather opened Tacos Erendira. Family members were a little skeptical when Omar and his brother Christian first proposed opening a new restaurant featuring organic and locally grown foods. They said it sounded like a north side concept. “That just fueled our determination,” Omar says. “It made us more thorough about what we were doing.”

When Nana opened for brunch a year ago, lines waiting for a table formed out the door. In its first year Nana has expanded into a second storefront, hired a chef and added a dinner menu designed to be constantly changing with what is fresh and locally available. The dinner crowd has grown more slowly, but the food has gotten rave reviews. Locally grown organic appears to work as a south side concept too. Though Omar says when they have a large dinner reservation, half the party still shows up looking for a restaurant at Halsted and Belmont first.

Now, Omar is already a little restless anticipating his next project. He’s been approached by potential partners about bringing Nana to other neighborhoods. He says he’d never really imagined himself pursuing the family restaurant business, he’d always wanted to work for a greater cause. It was only as he’d read about problems in the commercial food industry that he found himself circling back to restaurants. He wants to follow “the concept” -- a sustainable restaurant tied in to the local seasons and fostering a local farm economy -- beyond the neighborhood where he grew up.

But there is still plenty to do in Bridgeport. And Nana has worked out to be something of a development lab. In its first year, Nana teamed up with a class of IIT students to develop potential environmental enhancements, including schemes for adding solar power to the roof, recycling waste heat from the kitchen and converting used cooking oil to fuel the Nana-Mobile, which makes the restaurant’s deliveries.

But the simplest project has been to grow the restaurant’s herbs around the outdoor seating, and Omar hopes to multiply that to rooftops and city owned vacant lots next season. “It’s still a science project at this point,” Omar says. “We have a lot to learn, but we’re looking at using about 15,000 square feet on vacant land, and other buildings my family owns.”

At the same time, he has been trying to put the storefront behind the restaurant to good use. Originally, he had hoped to lease the 1,600 square foot space, but has been frustrated by lack of proposals backed up by written business plans. As the summer drags on, Omar has had some ideas for opening another business in the space himself.

He has so far resisted persistent suggestions from one interested party that he capitalize on relationships with the 30 plus local farmers who already supply the restaurant, to open a badly needed little green grocery. In fact, I am that interested party – it broke my heart when the Egg Store closed, and Halsted Foods could use some back up in the fresh produce department. But Omar is right that the grocery business is notoriously tough, especially in a tiny format. He is considering other restaurant concepts that might build off Nana’s existing kitchen instead.

Meanwhile, one of his neighbors has been building out another new restaurant behind the curtains in a storefront across the street. Omar says that when he asks, the owners have been vague about what kind of restaurant it will be. But he is enthusiastic about potential synergies as Halsted Street wakes up.

For a long time, he says it seemed like property owners on Halsted were hanging back, waiting to see what would happen. Now, new businesses are percolating and the Bridgeport arts scene has been getting press. As owners of neighboring business bring clients to Nana for lunch, Omar has been floating the idea of a new business association to help them cross-fertilize.

“If you look at Wicker Park, or Lincoln Park, they have very active business associations. And I think that’s a weakness in this area, there’s a disconnection among local businesses. There is power in numbers, but we can’t capitalize on that if we don’t really talk to each other."
Posted by Kristin Ostberg at 1:42 PM

Email ThisBlogThis!Share to TwitterShare to FacebookShare to Pinterest
Labels: Food