The Neighborhood is the Image of the City: Part 2

For a hundred years Chicago’s population grew fast and without pausing, and it mostly grew in jumps. Some of it was annexations, the city boundaries redrawn to swallow swelling neighboring settlements. Some of it was native born whites traveling from farms or eastern cities to seek new opportunities. But a lot of it was waves of immigrants from foreign countries. Sent in surges by crises in their homelands, the Irish first, then the Northern Europeans. The 20th century saw a “new wave” of immigrants from South and Central Europe.

They would arrive poor, ignorant of local customs, they’d settle in the slums near the center of the city. And as they learned the language, improved their lot, they moved outward to better neighborhoods. They’d put some distance between themselves and the latest foreigners who didn’t know how to live.

In the 1910s and 20s, social scientists thought their movements resembled populations vying within an ecosystem. They wrote about natural areas, even ‘moral zones’ where people with similar characteristics – ethnic, social, moral - would find each other, settle in enclaves where their qualities would intensify by mutual reinforcement.

Bridgeport is still marked by these enclaves. The faint outlines still distinct in the memories of guys who were teenagers in the 1970s and 80s. They’ll tell you ‘I couldn’t come over here,’ because of the Polish guys who used to hang out at The Shack at the top of Morgan Street. Or they’ll describe how Armour Park was jealously watched by Italians. I’d never heard anyone use the word ‘dago’ in conversation until I lived in Bridgeport. Sometimes it sounds like a justification more than a complaint. “We weren’t racist,” an acquaintance says drily, “we hated everybody.”

Each new wave of immigrants endured their share of indignities and prejudice, remembered for generations after the fact. In the 1850s, the WASPs thought the Irish were natural degenerates, prone to drink and crime. Their labor was wanted to dig canals, but Protestant shopkeepers posted signs in their windows that said “Irish need not apply.” In the 1880s, the Germans rioted when nativists passed blue laws to control their drinking on Sundays -- Sunday being their only day off, they spent it in the beer garden, indulging in socialist talk. By the 1920s, when the federal government established immigration quotas, they targeted the ethnic proportions as they were in 1890, before the “new wave” of Italians and Poles had overtaken the northern Europeans.

The native born weren’t just impatient for the immigrants to learn the language and assimilate, they saw them as suspect in a more fundamental sense.

In Black Metropolis, St. Clair Drake and Horace Cayton  set the stage for their account of Chicago’s negro ghetto by describing the city defined by the antagonism among populations, and observed that antagonism was expressed in two different traditions of reform: “one concerned with stopping ‘vice’ and petty political graft; the other with controlling predatory big business.”

Vice was the special concern of the Protestant establishment – prostitution, gambling, and especially drinking. Their commitment to control the drinking of the lower classes predates Prohibition as a proxy for other tensions.

In the early 20th Century, the laborers were the foreign born. Then as now they took the jobs no one else wanted because they were too dirty, too dangerous, the work slaughtering animals and the jobs on the steel mill floor. As they’d assimilate, blend into the ranks of the native born, they tended to advance from hard labor into the skilled trades and clerical work.

European immigration stopped during World War I, then resumed, but at a trickle, hampered by quotas. With war engines booming, the demand for labor was met by black migrants, traveling north to escape the sharecropping system and unchecked violence in the Jim Crow south.

The black migrants came in the tens of thousands at first, by the 1940s they came in the hundreds of thousands, but already by the 1910s the great migration changed the dynamic between black and white Chicagoans. At the turn of the century, the city’s black population numbered just 30,000, and they safely inhabited most of the city’s neighborhoods “on terms of almost complete social equality with their white neighbors,” according to the sociologist Gunnar Myrdahl.

By 1920, their numbers had tripled, and 85% of them lived in the new black belt that started in the Douglas neighborhood next to Bridgeport, between 26th and 39th Street, and extended south through Grand Boulevard to 47th.  By 1930, the populations of Douglas and Bridgeport were roughly equal – about 50,000 and 54,000 persons respectively, except that there was just one Negro counted in Bridgeport that year. About 5,500 persons in Douglas were white.

The black migrants were not unlike white ethnics finding their enclave in the inner-city slums. They took the place of the foreign born at the bottom of the employment chain; they endured the increased hostility of the native population. As white immigration stopped in the 1920s, William Julius Wilson would observe “eventually, other whites muffled their dislike of the Poles and Italians and Jews and directed their antagonism against blacks.”

The position had been a temporary one for ethnic whites. Eventually, they’d get their foothold and assimilate, they’d move to better neighborhoods and disappear into the population. Blacks couldn’t disappear. For decades, the pathway out of the enclave was tightly restricted – by custom, by law and by violence.

The Chicago newspapers inflamed mistrust with alarming headlines (“Darkies Swarm North”) and stories that exaggerated the numbers of migrants, their suspect character, their supposed propensity for crime.

By 1917, the Chicago Real Estate Board had adopted formal policies for controlling the sale of properties to black families (“each block shall be filled solidly and…further expansion shall be confined to contiguous blocks”) and made violations punishable by expulsion.

When, that same year, the US Supreme Court ruled that segregation ordinances were unconstitutional, the Board began promoting racially restrictive covenants – legal contracts on the deed of parcels of land that prohibit blacks from using, occupying, buying or leasing properties to which they were attached. A map of parcels bound by such covenants as they stood in 1947 shows the black belt thoroughly surrounded by them – an iron ring cutting it off from other neighborhoods.

Some of the covenants were already falling to challenges in the local courts, and the US Supreme Court declared racially restrictive covenants unconstitutional in 1948. Black families moving to white neighborhoods were still slowed by violence – mobs of angry housewives with bricks screaming obscenities. Men with bats destroying property, threatening and sometimes following through with assault.

Meanwhile, the black migration grew faster. By 1950, there were almost half a million Negroes in Chicago – their numbers doubled from 1930. They brought Chicago’s population to its all-time peak in 1950, even though the numbers of the foreign born were dropping at the opposite rate.

Bridgeport’s population was declining too, but gently. From 54,000 in 1930, to 46,000 in 1950, the number of foreign born in Bridgeport dropped from 15,000 to 8,000. Its immigrants were assimilating, following that path outward to greener pastures. But the neighborhood they left behind was prospering too, its Democratic machine running at maximum influence. Mayors Kelly and Kennelly both came from Bridgeport, Richard J. Daley would take the Mayor’s Office in 1955.

Next door, Douglas was crammed. Its population was approaching 80,000 by 1950, the population of Grand Boulevard was 115,000. With the regular path of assimilation forcibly blocked, the black belt was bursting at its seams.

Decades later, writers and activists would look back at the community described in Black Metropolis and call it remarkable.

Black professionals, the middle and working classes lived close by the lower classes, black Chicagoans who’d lived in the city for generations side by side with those who’d just come from working in the fields. Of course, they did so because they could not live elsewhere. But in living there, they provide more than their good example as role models to reinforce mainstream values. They provided more formal stability, the kind of economic and educational resources that might lend ballast in hard times. And life in the black belt afforded the black professionals some measure of control over their own lives, a refuge from the prejudice they faced outside its borders.

The boulevards of Black Metropolis were lined with gray-stones, its commercial streets vibrant with black owned businesses, law firms and banks. Black artists and writers heard the whispers of meaning that life might have on those streets, they found their fellows, some of them found their audience and made their names. 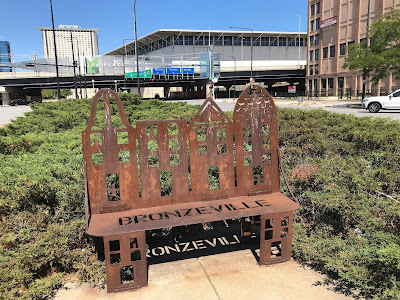 But the black belt was not romantic. It was desperately overcrowded, and often desperately poor.  Many of its buildings were run by absentee landlords, including institutional ones who let them deteriorate in ways that would be criminal now. Its residents suffered high rates of illness and mortality, they were starved for city services – garbage was allowed to accumulate, schools and playgrounds were overcrowded, crime and police brutality were high.

And there was the weight that contempt inflicts on the psyche.

What peculiar personality formations must be caused by these conditions, Richard Wright mused in his introduction to Black Metropolis. He calls the Negro “child of the culture that crushes him,” he says his fundamental dilemma lies in the fact that he believes in its ideals, he wants to participate and uphold them, even as that society so thoroughly rejects him.

His dilemma is more than a special interest -- it reveals a fatal division "lodged in the innermost heart of America... It haunts her conscience, taints her actions, and might ultimately cause her death." It is a problem bigger than the Negro problem, he writes, but one of which the Negro problem is a symbolically important part.

This is the second of 5 parts on Bridgeport and Douglas and the image of Chicago.

Posted by Kristin Ostberg at 10:29 AM

Email ThisBlogThis!Share to TwitterShare to FacebookShare to Pinterest
Labels: An Introduction, Notes