Notes from the Bar: Labor History Night at Maria's 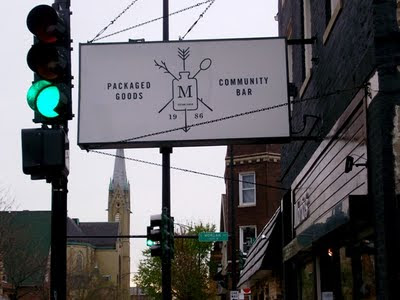 It was Future of Bridgeport think-tank night at Maria’s Community Bar – that happens most Sundays from 6-8pm. A few weeks ago, there was a special lecture on some incidents of 19th century labor strife in anticipation of the 125th Anniversary of the Haymarket massacre.

Afterwards, I had a chat with an older couple who’d stopped in by chance and stayed for the lecture. I liked them, they were very decent people. We disagreed about almost everything. They’d listen thoughtfully to every point I’d offer up. Then they’d vigorously make the opposite point.

They don’t live in Bridgeport themselves, and they are technically Republicans. At least he holds office in suburban county government as a Republican. She works for county government too. She grew up here, around 33rd and Morgan. He says when he first came to see her there the neighbors slashed all his tires – they didn’t like him because he was Italian. He was from Taylor Street.

He was 22 when they met, just out of the army. She was 16. She was one of the first girls to attend Tilden High School, the year it became co-ed. Sometimes Tilden sounds like it was tougher back then than they say it is today. She says she lasted half a day at Tilden, and never went back.

They got married because she got pregnant. Now they’ve been married for 40-something years, they’ve raised 3 sons.

They moved to the suburbs shortly after they married, but they bought a condo in the former hospital where he was born, and they like to drive around to different neighborhoods and stop in places, just to see what’s going on.

His father used to take him around with him to turn out the vote – they had some of the black precincts. He said the women were the voters there, the men didn’t vote. He said a couple things he might not have, if he knew I was going to go home and type it up on my blog.

“I’m not racist,” he says – though people tend to say that after they’ve described ways they think blacks act differently from other groups of people. He also tends to lament that people and politics are all different now. The people aren’t as responsible, the politics are more corrupt.

But he thinks the problem with the people is that they have forgotten that the way to live is to look out for each other. “It can’t be all about yourself,” he says, having raised 3 sons, and standing in the company of the woman he married over 40 years ago, when she was still a girl. It sounds like things might not have looked entirely promising for them when they first started out.

About politics, he says “Sure it was corrupt then,” but you always had somebody you could go to for help when you needed it. You’d go to the precinct captain if you needed a garbage can, or if you needed to get your son off of death row. Well, he couldn’t necessarily get your son off death row. But back then elected officials served the people who voted them into office; now they serve the lobbyists who pay for their campaigns.

They don’t have much sympathy for government workers now. Even though they both work for government themselves. They think Scott Walker was right to bring the unions to heel in Wisconsin. She describes negotiating with the unions here for weeks before they thought they’d reached a workable compromise -- then the union reps announced they couldn’t commit, they had to take it back to their membership and start over again.

He claims Wisconsin government workers pay a miniscule fraction toward their own health care. We’re in the same situation in Illinois -- only our budget is worse. He says he stands in line in the pharmacy behind elderly people who fork over hundreds of dollars in cash to pay for their meds, and then he gets to the counter and pays almost nothing. “It’s not sustainable!” he says.

That’s why I liked them, even when we didn't agree, they didn’t seem to be making harsh judgments on some distant group of other people.

There is a classic study of the Taylor Street area done back in the early 60s, when he was there as a young man. It’s called The Social Order of the Slum. The author challenges the prevailing view that slums were defined by their lack of social organization, and by deviance from moral order. The deviance was assumed to be self-evident in the high rates of delinquency, teen pregnancy, divorce and crime.

The author of the study doesn’t challenge that, but he uses the neighborhood around Taylor Street to argue that the slum is not disorganized so much as organized around different principles, principles designed to preserve the safety of its inhabitants in an unstable environment, rattled by forces beyond their control.

The guy at Maria’s remembers what people said about his old neighborhood. He was a tough kid himself. Though he qualifies “We’d go fight under the viaduct. We’d fight with our fists. Now they use guns and shoot people in front of schools.”

He had nearly a dozen half-brothers and sisters. He says most of them got into trouble, they got into drugs, or into crime, or went into jail. He was starting to get involved in some questionable dealings himself for awhile, up on the Gold Coast. But then he decided he didn’t want to get embroiled in all that. So he quit that life. He got himself a factory job.

He says he thinks at the end of the day, it came out for the best that they cleared part of his old neighborhood to build the campus for the University of Illinois. Look at that neighborhood now. Though he seems to hesitate a little when I am surprised to hear him say that.

He says there’s a difference between how things were back then, and how they are now. Back then, you could conceivably get yourself a factory job, and support your family, lead a decent life. Now you need a college degree, even a graduate degree to get a foothold. And the good life, or at least a life in which you can provide for your family in “organized society,” is harder to grasp if you don’t start out with one.

“Keep thinking,” he encourages me amiably before they leave Maria’s Community Bar for the night. “I haven’t figured it all out yet.” 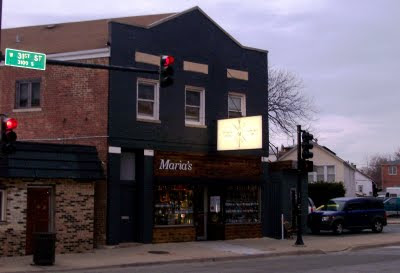 Posted by Kristin Ostberg at 6:33 AM