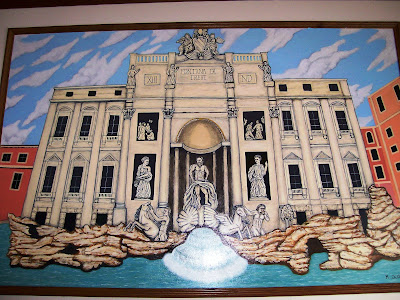 Calabruzzi’s Café is a family owned and operated restaurant of Italian American cuisine, but it also marks the return to Bridgeport’s Halsted strip of a restaurant that had disappeared for awhile. At least it reminds me of a youthful version of the kind of place my parents might have gone on a date – a place you go for a nice dinner that starts with a fancy cocktail, something like what I imagine the Governor’s Table and the Coral Key used to be.

Saturday, I went in for dinner with the friend who is my source of information about those other establishments. He hesitates at the comparison, he remembers them being more formal – the menu more surf and turf, the bartender dressed in a jacket and tie. “We wouldn’t walk into Coral Key dressed like this,” he says. Though he agrees the dress code was partly a factor of the era.

It was an era before the arrival of intentional food, cable cooking programs and the widespread use of the term “foodie” to describe the amateur food critic. When a good restaurant was a place that served a meal with roots in home cooking, except with richer ingredients, cooked skillfully by somebody else – which is what our dinner at Calabaruzzi’s was like. 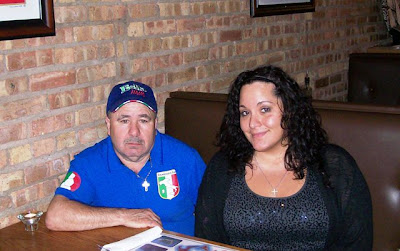 Owner Rosanna Mandile comes from a cooking family, and family is strongly represented at Calabruzzi’s. Her father, Angelo, was a cook at Papa Milano’s (also of that other era) when he first came to the States from Italy in the 1970s. Later he became a mason to better support his family, but the Mandile family always cooked. In the winter, when construction trades were slow, they started cooking mid-afternoon. They cured sopresatta and made wine, they jarred eggplant and tomatoes, and mushrooms her father gathered from the woods. They bought rabbits from a farm in Michigan, her father and uncle skinned their own.

Rosanna got her first restaurant job at 15 – she worked at Maggiolini’s, a pizzeria one of her uncles owned in Gage Park, until she married at 22. Pizza is a central part of the menu at Calabruzzi’s. She says it’s the water that makes Chicago pizza superior. Her aunts mix dough with Evian -- she can’t do that at the restaurant, but even Chicago tap water makes pizza here taste better than what they make with the water in New York and LA.

When she married, she moved back to Bridgeport with her husband. Her father-in-law was in the flea-market business and she worked for him for a few years. But she had cooking at the back of her mind. She traveled to Italy shortly after her marriage, learning recipes from her Italian aunts as she travelled the south and central regions.

She began planning to open her own restaurant in earnest 4 years ago. The family owned the building at 3304 S. Halsted, but first they had to clear it out. It had been vacant since the 1980s, her father in law had gradually filled it with furniture, it was part of a network of storefronts he used to warehouse merchandise for his flea market enterprise. They sent a semi-load of donations to the victims of Hurricane Katrina and shuffled the rest to other facilities.

Then they rebuilt the storefront from the floor to the ceiling. Angelo poured the concrete floor and built the bar out of masonry. They restored the tin ceiling with a copper finish in honor of the coppersmiths of her mother’s hometown. Her cousin, Nicholas De Crescenso, painted a large mural of Rome’s Trevi Fountain for the north wall at Rosanna’s request. The south wall is hung with maps of Calabrria and Abruzzo painted on towels. Rosanna says the family name, Mandile, means towel; her father came from Calabria her mother from Abruzzo; Calabruzzi’s is a conjunction of the names. The staff, 5 of whom are cousins, all wear Italian soccer jersey’s and puma track shoes – in honor of another cousin who is a 2012 Olympic hopeful in women’s steeplechase. 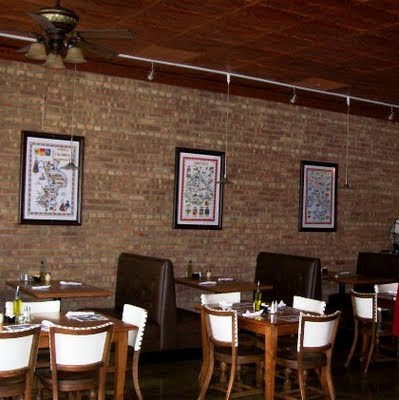 After years of research and a lifetime of cooking, Rosanna had developed a menu that was 10 pages long. “Everyone said ‘You’re crazy,’” a 10 page menu would put her out of business. So she pared it down to the basics, “what people are used to around here,” and the rest of it will cycle through the specials list. There will be several preparations of rabbit; cardi soup, made with real cardoons, not American celery, for the New Year; and a pescara pizza with shrimp, clams, mussles and calamari for Lent. Meanwhile, the regular menu includes family specialties, like pizza made with their own sopresata mix, her father’s special pescara salad, and a cannoli she makes from a pizzelle cookie.

Calabruzzi’s opened for business quietly 3 weeks ago, 3 days before the Sox Home Opener, to be precise. “I wanted to give my staff time to get their bearings for a few days,” Rosanna says.

Its arrival rounds out a trio of new restaurants on Halsted Street that cover the culinary bases: Buffalo Wings and Rings is the Sports-Bar; Nana has the cutting edge organic cuisine; Calabruzzi’s is traditional Italian-American, served in a dining room with warm décor that makes you want to sit down and eat-in. And the owners of all three establishments have known each other for years; now they can lend each other mutual support.

The owner of Nana came to Calabruzzi’s to eat the first day it opened, and left a glowing comment on the restaurant’s facebook page. Rosanna says the partners at Buffalo Wings and Rings have been generous with advice and have sent her patrons when they’ve had an overflow crowd. Between the three of them, they’ve multiplied the reasons to stop in on Halsted Street. 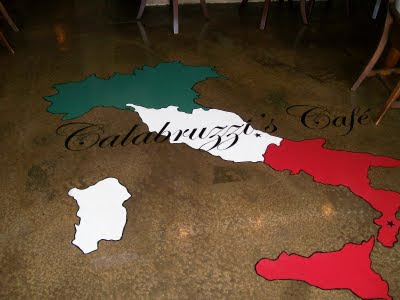 Posted by Kristin Ostberg at 2:29 PM