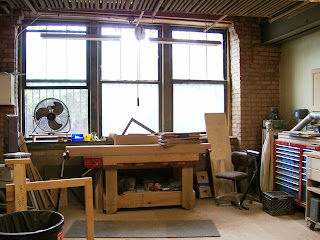 Hal Link builds custom furniture and cabinetry from a high-ceilinged basement studio in the Bridgeport Art Center, overlooking the river at 35th Street. Most of Link’s furniture costs from $2-10,000, which is about what you might pay for a hand-made bike. Then, every couple years, he gets a major commission.

One year it was a wall size buffet in the arts and crafts style. When he asked to see the architectural drawings for the house it would fit in, it turned out the client hadn’t commissioned them yet, so he helped them design their house. 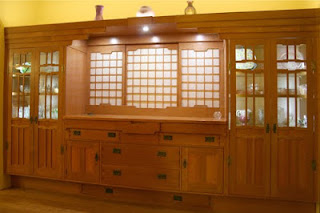 This year, he’s building a chair modeled on the English coronation throne – a 13th century masterpiece first commissioned by King Edward I. Hal’s built other thrones, including one with a phoenix rising from the back, which he made from urban wood felled by the Emerald Ash Borer for the “Rising from Ashes” furniture show sponsored by the Chicago Furniture Design Association (CFDA). This one will rest on the backs of hand-carved griffins, finished in gilt. 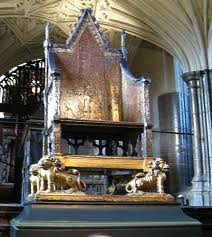 Hal built this chair 18 years ago and it’s comfortably weathered by a life outdoors. (It is also feathered with sawdust in this picture.) He uses it as a camp chair at the Pennsic War, hosted by the Society for Creative Reenactment every year in Pennsylvania. Centuries ago, Hal says, the seat would have been made of slung leather, which stretches over time, so he used wood instead. It is remarkably comfortable to sit in – what it lacks in upholstery it makes up with ergonomics. 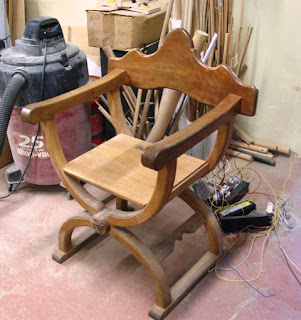 Hal’s specialty in medieval furniture and his other specialty, in arts and crafts style, are complementary, in a historical sense. John Ruskin, father of the English Arts and Crafts movement, was a champion of the gothic aesthetic. He thought its rude vigor reflected the rugged character of the Northern landscape, and he thought its abundance of fanciful detail reflected the vitality of the craftsmen who carved it.

Greek buildings were all smooth surfaces for reflecting the “peacefulness” of Mediterranean light. Ruskin thought their rational lines and repetition reflected the enslavement of the Mediterranean craftsman, “for the perfection of his execution can only be reached by exercising him in doing one thing, and giving him nothing else to do.”

The Arts and Crafts movement he helped inspire had the same complaint about factory production, where each worker was reduced to repeating one task over and over again. It promoted objects that were fashioned by craftsmen rather than assembled by pieceworkers. But the movement had natural limits – only so many workers could find employment supplying their cult of craft, because craft-made objects cost too much for the workers themselves to afford.

If that ever changes, global supply chains may help it along. They allow us to meet our basic needs with a superabundance of very cheap goods, so that even people with modest incomes can save to invest in a few very good things, if they’re inclined to do it. And the blogosphere hums with people who are. The dress-like-a-gentleman-movement and the fewer-better-things crowd – they’re informed by a densely cross-linked world of discovery agents, searching out tradition and craft in objects from knives to watches to well made shoes.

Their influence hasn’t necessarily shown up in employment stats yet – the number of small manufacturing companies has not shown a steady increase as far I can tell. But it does show up in the streetscape, where buildings abandoned by big industry have been steadily reclaimed for small ones, even when the rest of the real estate market held its breath.

Before Hal had a workshop in the Bridgeport Arts Building, he was in the Spice Factory on Cermak, just north of the river. This was in the late 1990s. The building was buzzing with artists, but it was also always getting pasted with liens and notices that utilities would be shut off. The owner had a reputation for promoting live-work space. Tenants would move in, then get evicted when she got caught. Link never lived in his workshop, but a poorly plumbed shower for people who lived upstairs used to leak into his space, ruining expensive materials, until he finally shut the water off and walled it off himself.

By 2001 he was looking for new space. John Edel had just bought the building that would be Bubbly Dynamics in the Central Manufacturing District east of the river, and Rick Price was renovating the Iron Studios to the west. Hal looked at both of them, but neither was quite ready to rent. He took a space in the former Spiegel ware house at 1300 W. 35th Street. It had just changed owners a couple years before. A large portion of it was still used for document storage. A teddy bear factory occupied the entire 2nd floor -- the American Bear Company still warehouses their stuffed animals there today. 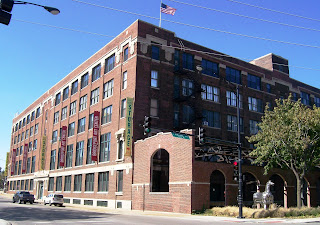 In 2006, when developers were still making big plans, the Metroplitan Planning Council and the Urban Land Institute published a proposal for a “creative industries district” on Cermak Road. It would incorporate the Spice Building with 2 of its neighbors to renovate a combined 800,000 square feet of studio and office space for artists, craftsmen and architects. It would cost $103 million to build, including a proposed $36 million in TIF subsidies.

Since then, something like that, but more sprawling, has continued to evolve organically in Bridgeport.

The building at 1200 West 35th Street, with 500,000 square feet, has steadily transformed itself from the East Bank Storage building to the Bridgeport Art Center. Hal was just the 2nd artist there when he moved in, in 2001. Today, over 40 artists occupy the 3rd and 4th floors. This year, the building launched a new Fashion Design Center, with studios, a shared cutting table, and an 18,000 square foot event space for fashion shows and other events. It has stunning skyline views; Hal laid its parquet floor.

The Zhou Brothers have housed artists at their 87,000 square foot building on 35th Street since 2004 – it boasts about 50 resident artists today. Ed Marszewski opened Co-Prosperity Sphere, a 5,000 square foot showroom and project launch pad in 2006. This spring, they launched SMALL, the Small Manufacturing Alliance, to showcase Chicago made goods.

John Edel renovated Bubbly Dynamics gradually, over 8 years, accumulating tenants in as he built the space out. It has 24,000 square feet of space and he calls it the Chicago Sustainable Manufacturing Center now. John bought his second building, a 90,000 square foot plant in The Stockyards, in early 2010.

Every 3rd Friday of the month, the Artists of the East Bank coordinate an open studio night with the Zhou Brothers building down the street. Just last week-end, the Bridgeport Arts Center hosted a launch party for Chicago Artist’s Month, together with SMALL, and Ed’s other new venture, Mash Tun, a magazine and craft beer festival.

This year, Chicago Artists Month aims to showcase how Chicago artists can serve as “essential building blocks in the development of vibrant and livable neighborhoods.” Bridgeport’s arts spaces demonstrate how the reverse is also true - neighborhoods can make room where artisans like Hal Link can build their business in stable, affordable space, and in concert with a community of peers. 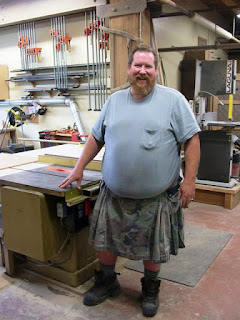 Posted by Kristin Ostberg at 9:18 AM