A Turn in the Local Waste Stream 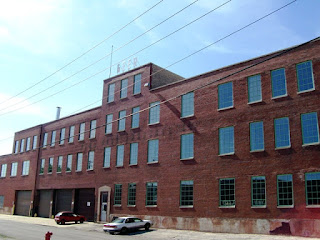 Coming Soon to The Plant: A Brave New Day for Municipal Waste


Bridgeport might soon find itself in the near vicinity of not just 1 but 2 anaerobic digesters. They will transform tons of raw garbage into heat and power, with a by-product of potent soil enhancements, and they may change the local landscape for waste.

One of them, under development at The Plant, an adaptive reuse project in the Stockyards, would take in 32 tons of food waste per day, and fuel the generation of up to 500 KW of electricity per hour – mainly to power food processing, beverage brewing, and an aquaponic farm, all located on site. The Plant’s developer, John Edel, says he expects to break ground within a month, and complete construction within 8 months. Growing Power’s Iron Street Farm plans to develop a digester that would eventually consume 100 tons of food waste per day, though they are still working out the details, including where it will be located and how it will be financed.

Anaerobic digestion is a proven technology. European digesters consume a full spectrum of farm, industrial and municipal waste, often in some combination at co-digestion plants. Their use in the US is limited almost exclusively to waste water treatment plants, and to commercial farms where they are deployed mitigating the polluting power of oceans of manure. Building an urban digester, that will consume municipal solids, is still a tricky process. The contractors who build them vary widely in expertise, and the financing must be knit together from subsidies and tax credits, since biogas is still on the margins of our power grid.

But that’s not because the plants are not potentially lucrative. In fact, profits from the heat and power generated by burning biogas could be secondary to the profits to be had from consuming huge volumes of garbage.


In the US, anaerobic digestion is mainly a waste treatment process, much of the methane produced is simply flared. That’s especially true at waste water treatment plants – there are over 3,500 digesters in operation at such plants in the US, but just over 100 of them burn the gas to produce power. There are only 191 digesters at commercial livestock farms, but 186 of them use gas in combined heat and power plants. Illinois has 3 farm based digesters, with capacity to produce 2,243 MW of power. Wisconsin’s huge population of dairy cows lead the nation in farm-based generation, with 29 anaerobic digesters with 120,982 MW of electric generation capacity.

By contrast, municipal solid waste remains largely untapped. There are about 250 million tons of it generated every year, according to the EPA. Undigested food waste in particular has much more power potential than manure, which has already been depleted once. And municipal solids are a reverse commodity – there’s great value to be realized by taking it off people’s hands.

That’s been more true ever since the passage of the Resource Conservation Recovery Act in 1976. Prior to that, municipal waste was mostly disposed in open dumps, left to leak contaminants into ground water, and seep methane into the air. The Act didn’t eliminate the old city dump, but it did prohibit the opening of new ones. It established criteria for the location, design and operation of landfills, and linked federal assistance to resource recovery and sanitary practices.

Regulation made waste disposal a more capital intensive endeavor. Substandard local dumps gradually filled and closed over the years. They were replaced by large scale, state of the art, regional facilities – and a more elaborate supply chain of recycling centers and transfer stations, where waste is aggregated for long haul shipping. 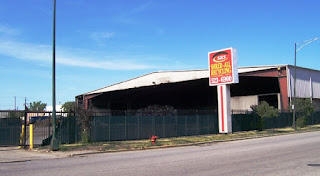 A 20th Century Waste Transfer Station, also in the Stockyards


In 1988 there were 8,000 landfills in the US. By 2006, three were just 1,750. On average, they each handled four times the waste. Waste haulers underwent a parallel process of consolidation – today the biggest operate their own landfills to retain revenue from gate tipping fees.

In 1985, it cost $8, on average, to deposit a ton of waste at a landfill; by 2004, it cost $34, and the US waste disposal business was a $40 billion industry. Since then, consumption may have slowed with the recession, but tipping fees have continued to climb, to a national average of $49 per ton in 2011.

Organic waste buried in landfills already decays anaerobically – in the absence of oxygen, it produces methane gas, and less of the carbon dioxide exhaled in open air rot. Methane is more effective at creating atmospheric greenhouse conditions than carbon dioxide, so the new, reformed landfills use pumps to capture it. Some of it is simply flared, but it can also be pumped to co-generation plants.

Land and Lakes of Park Ridge is a typical new generation landfill operator. Founded as an excavation company in 1966, they are vertically integrated, operating a fleet of waste hauling trucks and transfer stations, recycling centers and landfills.

Land and Lakes reclaims methane from its landfills to generate power – it boasts that it sends enough to supply 52,000 households into the ComEd grid. It also boasts the first “bioreactor” landfill permitted in Illinois, at its River Bend Prairie landfill in Dolton. The biogreactor manipulates moisture levels to accelerate the decomposition process, and produce more methane faster.

Anaerobic digestion takes that process steps further. Digesters vary in configuration -- some farm based digesters are big, covered pits of slurry, brewing microbial reactions. Digesting solids is a more complex process. The digester at The Plant is engineered like a complete gastro-intestinal tract.

The solids, including food waste, brewers grains and possibly fats from rendering plants, will be fed through a mascerator to chew large pieces into smaller ones. The chewed solids will pass into the primary digester, a 100 foot horizontal tube, where bacteria will start a series of chemical reactions, as paddles gradually churn it through the tube over the course of a month.

Coming out the other end, digested solids will be separated from liquids with a screw press. The solids will pass out of the system into a covered pile, and eventually sold as rich organic fertilizer. The liquid will continue into the second digester, a 54 foot tank with a membrane roof. The membrane will expand as methane collects, some of it pumped in from the primary digester, and some of it exuded by the liquid digestate. The spent liquid can also be sold as soil amendment.

From there, the methane gas will be piped into the building where it will fuel a combined heat and power system. The Plant will consume both the heat and the power on site, the system is sized to meet the building’s needs. These are estimated to average 300KW per hour under normal conditions, but the system will be capable of generating up to 500KW. It will be used to power commercial food processing, breweries, and the grow lights for the aquaponic farm, all of which generate their own heat -- industrial buildings often have to be cooled off all year round. So the heat generated from The Plant’s combined heat and power system will be run through an absorption chiller to produce cooling power. They are adapting the existing, extremely well built ammonia cooling system the building came with to run cold water instead.

Every aspect of The Plant has a full-cycle logic like that. The building that was once a mass production meat processing plant is being converted to incubate small, sustainable food producers, and the indoor farm. The aquaponic growing system will recycle waste from fish to fertilize plant crops; the digester will fuel generators to make power from garbage. That will make it much more affordable to run grow lights for indoor farming. And it will all work within the regular cycle of carbon exchange that goes on all the time between biotic life and the atmosphere -- as opposed to releasing vast carbon reserves that have been sequestered underground for hundreds of millions of years by burning fossil fuels.

Building it will cost about $2 million. Most of it will be paid for with a Food Scrap Advancement grant (F-SCRAP) from the Illinois Department of Commerce, together with a Recovery Act grant (ARRA) and a loan from the Chicago Community Loan Fund. The Plant has contracted with Eisenmann Corporation to build the digester itself, and with Alcor Energy Solutions to build the combined heat and power system. Eisenmann is a family owned German engineering firm with North American headquarters in Crystal Lake. They have built at least 80 anaerobic digesters in Europe and hundreds of other kinds of facilities in the US. Alcor has also completed numerous combined heat and power systems, but its owner may be more accomplished as an engineer than as a project manager. Alcor is behind on its contract at The Plant, the delays have been costly, time will tell if they are the firm that actually finishes the combined heat and power system at The Plant.

But once it’s all up and running by spring 2013, early estimates show more than half potential revenues coming from tipping charges for accepting waste, and a smaller fraction earned by selling power to tenants. Edel anticipates the tipping fees will be quickly consumed by the cost of operations. The Plant will take on the role of waste hauler itself.

The estimates are also based on tipping charges less than half the national average rate. And there is a sub-trend in the municipal waste market that moves against the long term rise of disposal fees. New, creative users such as organic farmers, bio-fuel producers, and now anaerobic digesters, are creating value for the best organic waste products –a value not earned just by hauling it away. Brewer’s grains are one example. 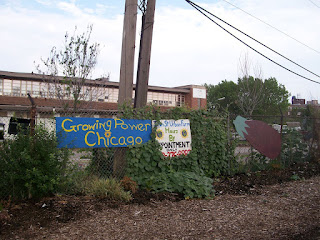 Josh Deth of Revolution Brewing says his recently expanded brewing operations generate about 8 tons of spent grains a week – all of which has been claimed as prime compost material by 2 urban farms, including Growing Power and City Farm. Deth says he pays the farms to haul the waste, because they are non profits with a mission he supports and he wants them to succeed, but he says Goose Island brewery is getting paid by farmers who want to use their waste, which can also be added to cow feed. In fact, bulk used cooking oil is already a commodity, its price tracks the price of corn. Aside from its potential use for making bio-fuel, farmers use it as an additive to soy feeds to make them more nutritious when corn costs too much.

Deth says Chicago’s other breweries still pay conventional waste haulers – probably for one of the reasons he pays Growing Power. Deth says as a business owner, he needs to be assured his waste will be hauled away consistently at regular times. But “it’s not garbage,” he says.

Still, the sources of organic waste are numerous, and plenty of producers pay to have it reliably shipped away. Edel says The Plant will offer the same service as the big waste haulers at the same price, “and you also get a gold start next to your name that says all of your waste is going to a sustainable business to make energy and food.”

The Plant is unlikely to face a shortage of fuel anytime soon. Food wastes aren’t the biggest component of municipal solid wastes generated every year, but after all the paper products are recycled, they comprise the biggest portion that goes to landfill. The EPA reports almost 34 million tons of food waste were generated in 2010, and only 3% of it was recycled. The rest could fuel a generation of urban digesters, and also help pay for them.
Posted by Kristin Ostberg at 5:43 PM