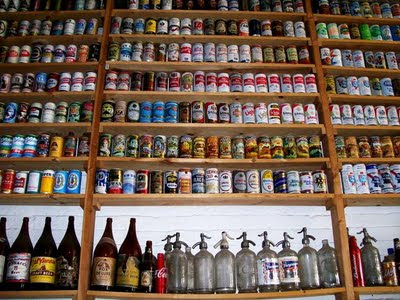 The north wall of Filbert's Root Beer at 3430 S. Ashland is lined with the beer can collection Ronald Filbert began in high school, and still improves with occasional flea market acquisitions. It includes cans for a couple flavors of champagne, and for Genesee Cream Ale, named for the river that flows through the town where I grew up. It also includes a few glass bottles with tap dispensers.

Otherwise, the collection is only tangentially related to what Filbert's does today as a bottler of soda pop, though Filbert's did distribute beer when Ron's grandfather Charles ran the business. Filbert's was formally established as a producer of barreled root beer in 1926.

The 20s and 30s were the glory days of root beer, before cola overtook it. Ron says Filbert's root beer was available on draft at most Chicago bars – they brewed and barreled root beer for Berghoff's for over 50 years, until 1988 when Berghoff wanted it bottled. Filbert's wasn't a bottler back then.

But if you're curious what Berghoff's original root beer tasted like, you can still pour a draft of Filbert's. They take walk in customers at the Ashland plant, and they sell root beer by the half and quarter barrel. Now they also sell it by the bottle, along with 16 flavors of fruit soda – everything from black cherry to blue raspberry to grapefruit. “Not their biggest seller,” as one taster observes “but very true to grapefruit flavor.” 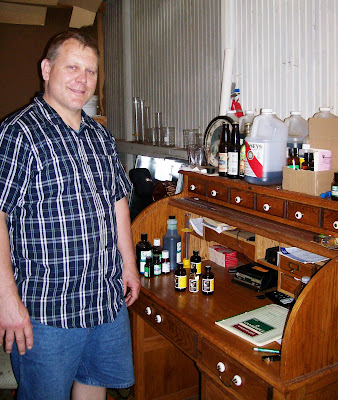 Originally, Filbert's operated out of 2 buildings at 2996 and 3033 S. Archer – one suffered a fire and the other was a tight space to run the business. Their current building on South Ashland belonged to Newport Beverage Company. When Filbert's first began to sell bottled soda, they hired Newport to bottle it, then when 2 of the Newport partners were ready to retire in 1998, Ron Filbert bought the plant, along with its bottling equipment, and their line of fruit soda flavors. Dennis Antkowiak, Newport's 3rd partner stayed on with Filbert's.

Now, Filbert's is one of 3 glass bottling companies left in Chicago. They also rent space to Bridgeport Coffee Shop, who roast their beans upstairs.

Dennis says the company that became Newport Beverage was founded as a German Austrian brewery in 1907. The original Mutual Brewing building still stands at Cermak and Spaulding – they became Mutual Bottling during prohibition, and were eventually acquired by Mr. Newport. Newport Beverage bought the Ashland Plant in 1952.

When Dennis started working there in 1971, the Chicago bottling business had boiled down to a dozen companies. In the mid-1980s, most of them went out of business in the span of a few years. Dennis recalls the big soft drinks launched aggressive retail promotions the smaller companies couldn't match. Ron Filbert says that's also roughly when the big bottlers switched from glass to plastic.

Today, Ron can name just 3 companies nationally that produce glass bottles at all. And there are just 4 bottling companies in Chicago. Including Pepsi, which bottles Pepsi's own brands; and Clover Club, which bottles private label product for other people. Goose Island brewery also bottles a Goose Island root beer and orange cream soda.

Ron says glass bottles retain a significant advantage: they hold carbonation and flavor better than their plastic counterparts, which “leak like a balloon.” Soda in plastic bottles has to carry a “best by” date; you don't need a “best by” date for a bubbly beverage bottled in glass.

Ron says he receives a truck of 4,000 cases of bottles about once a month. He says Filbert's has over 200 accounts in the Chicago region; he used to say they have 300. The recession has been hard on their business, not because people stop drinking soda pop, but because it's put mom and pop stores, bars and restaurants that carry Filbert's out of business.

So a couple months ago, Ron Hazucka joined Filbert's to build up the customer base. He's an old high school friend of Ron Filbert's; he used to drive delivery trucks for Filbert's when they were both still in school. Hazucka says even in good times, they might expect to lose accounts to attrition, but they're a small operation and Ron Filbert's too busy making and distributing soda pop to pursue new accounts. 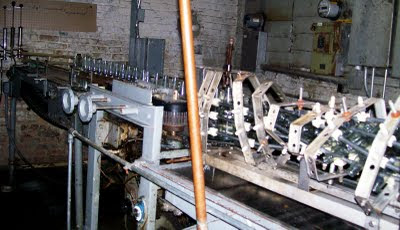 The bottle washing portion of the assembly line

You can get a good idea how he makes it from a video Chicago Revealed posted on YouTube. He mixes the soda syrups upstairs, where he keeps cupboards of extracts in plastic jugs. He'll mix the extracts with a sugar solution in agitating tanks, then the syrup's fed through a plastic hose to the bottling line downstairs. A conveyor caries a long line of bottles to be rinsed, dosed with syrup, filled with carbonated water, capped, mixed by shaking, and affixed with a paper label, before Filbert's personnel pull them off the line and pack them in a box. 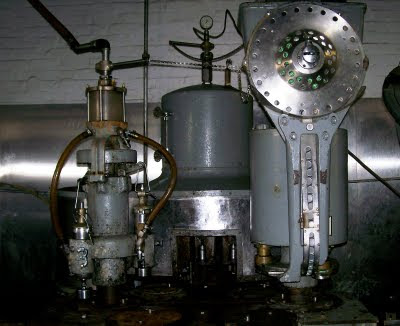 Ron Hazucka is enthusiastic about capitalizing on Filbert's heritage – people remember the product, it's been made the same way for 85 years, crisp and clean with real cane sugar, unadulterated by vanilla or other novel supplements. Eighty-five years, he says, how many other local companies can make claims like that?

When he first Googled the brand, he was astonished to see pages of results even though they didn't have a web-site yet. There were strangers from as far away as Washington State selling Filbert's root beer on Amazon for $25 a case. There were people doing taste tests on You-Tube – even the reviewer who taste-tested the Filbert's pineapple soda while eating green apple jelly beans said she couldn't put the soda down.

Meanwhile, the soda pop world seems to be sprouting small companies again, boutique label soft drinks with medicinal herbs, or an extra spicy bite, or an old-time appearance. Analysts say a lot of that proliferation is “pseudo-diversity,” a multitude of choices that can be traced back to a handful of owners. Philip Howard, a professor at Michigan State, surveyed 94 retailers across Michigan and found they carried 993 varieties of soft drink across 195 brands. But 41% of them are owned by the big three that dominate the soft drink market – Coke, Pepsi and the Dr. Pepper Snapple Group.

On the other hand, almost 60% of them aren't. And if you're blending your own flavor of soda pop, you're going to need someone to bottle it for you, because bottling equipment is big – “It isn't something you can set up in your kitchen,” Ron says.

In addition to the flavors they bottle under their own label, Filbert's bottles soda they mix for other private labels, like Gale's Rootbeer, Route 66, Druther's, and Starr's Original Ginseng. And Ron's in the process of mixing a new ginger beer for Maria's Community Liquors, who are realizing the advantage of having one of Chicago's last bottling companies in their own backyard.
Posted by Kristin Ostberg at 8:33 AM

Email ThisBlogThis!Share to TwitterShare to FacebookShare to Pinterest
Labels: Drink